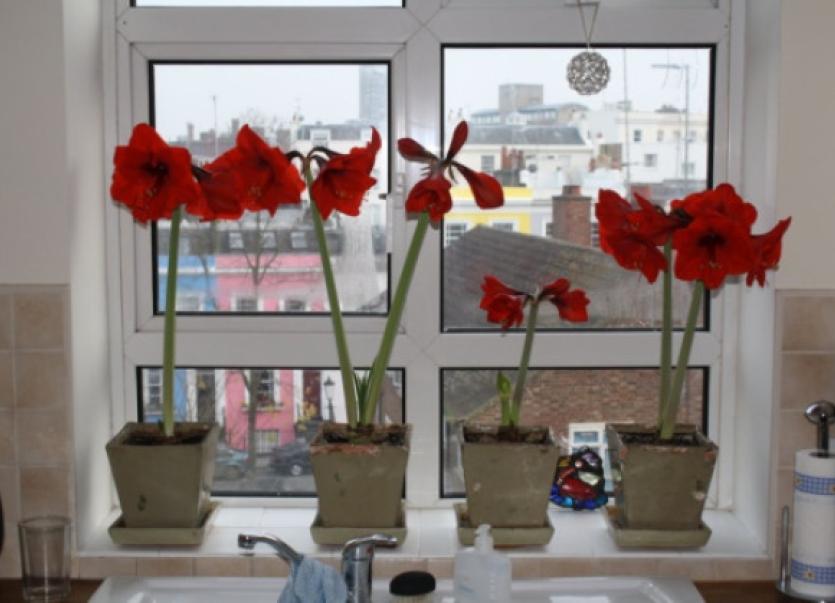 Now is the time to plant amaryllis bulbs to produce bold, bright coloured trumpet shaped flowers in a couple of months. The single- coloured flowers vary in colour from pink, red, orange, white to flowers with stripes and flecks. Commonly called amaryllis, their correct name is Hippeastrum, they come originally from South America. More than eighty species have been identified growing in Brazil, Peru and Chile.

Now is the time to plant amaryllis bulbs to produce bold, bright coloured trumpet shaped flowers in a couple of months. The single- coloured flowers vary in colour from pink, red, orange, white to flowers with stripes and flecks. Commonly called amaryllis, their correct name is Hippeastrum, they come originally from South America. More than eighty species have been identified growing in Brazil, Peru and Chile.

Dutch growers have produced a large number of varieties by crossing one species with another to produce varieties with massive blooms and very large bulbs. Since they come from South America, amaryllis bulbs are tender and are grown as pot plants indoors. When buying amaryllis bulbs pick the biggest bulbs available, the larger bulbs can often produce more than one flower spike, 2-3 feet tall with two or more giant trumpet flowers.

Amaryllis are easy to grow indoors on a warm, bright window sill. Plant them now and they should flower in 8-12 weeks, depending on the temperature.

Plant the bulbs in terracotta pots rather than plastic ones. The flowers are top heavy so they need a sturdy pot for stability. Soak the thick white roots in warm water for a few hours before planting, remove any damaged roots. Plant the bulbs in a rich, gritty, multi-purpose compost, leaving the top half of the bulb exposed. Water sparingly until the bulb starts to grow, over-watering can rot the bulb. The flower bud will emerge first from the top of the bulb followed later by broad, arching leaves. Stand the pot in full light, turning daily to keep the stem upright. Tall varieties may need a cane for support. The flowers last longer in cool conditions, away from strong sunlight.

After the flowers have wilted, remove the dead flower heads from the top of the stem, do not cut away the flower stem, allow it to die down naturally. Move the pots outside for the summer when the weather is warm enough to a shady spot and water regularly. Feed once a fortnight with a high potash feed, such as tomato fertiliser. During this period flower stems for the following year are produced in the bulb. The more leaves the bulb produces during this period the more flowers you will have the following year. Amaryllis bulbs are evergreen so they do not require a dormant period. Move pots to a cool position in the autumn, like a frost-free glasshouse. Give them a rest period of about two months, keep the soil just moist, do not feed. Some or all the leaves may die back. In spring move the plant to a warm place and cut all leaves to a few inches above the bulb. Insects like to hide in the top of the bulb and can cause lasting damage so spray with an insecticide to kill any pests present. Repot bulbs when they have totally outgrown their pot which may occur after 3-5 years. Each year scrape away the top inch or two of compost and replace with fresh compost.

As mentioned last week a protective hedge can mitigate against winds but will time to establish so to ensure high winds don’t lead to rocked plants and loosen or even broken roots. Check tree stakes and ties regularly to make sure they are holding the trees or shrubs firmly without cutting into the bark. Firm the soil around the stem of the tree. Many plants are prone to wind rock, in particular tall roses and newly planted trees and shrubs that have not yet rooted into the surrounding ground. Excess water can enter the roots and in frosty weather can kill the roots. Those that have survived the severe winds we had in early 2014 should be survive so focus on newly planted trees and shrubs.

Remove weeds from herbaceous borders and flower beds. Spread a layer of compost over the borders and allow the worms to work the compost into the soil. You can put the compost over dormant bulbs and perennials and it will give protection against frost. Spreading the compost now will eliminate the hard work of digging the compost into the borders later in the year and avoid damaging plants or digging up bulbs. Spread a thick layer of chipped bark or compost around tender plants to insulate them against frost. Cover the soil around the base of shrubs like fuchsias and ceratostigma that are borderline hardy in some areas with compost.