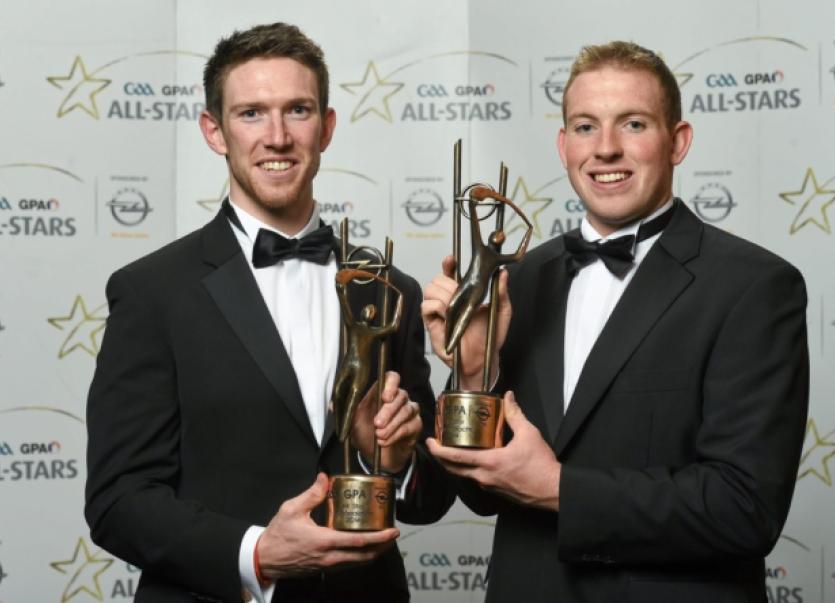 Last weekend proved to be a very special one for Limerick hurlers Shane Dowling and Seamus Hickey when they were announced as members of the 2014 All Star hurling team.

Last weekend proved to be a very special one for Limerick hurlers Shane Dowling and Seamus Hickey when they were announced as members of the 2014 All Star hurling team.

It has been the tradition now for some time that the teams who reach the All Ireland final gain most representation but having two Limerick players on the team announced is a major boost for the players involved but also for the Limerick team. All Star awards are given for individual performances over the course of the championship and in this regard both Hickey and Dowling had a very good year.

The All Star team announced saw no player from Cork even though they are the current Munster champions. Such awards could not be gained were it not for the contribution of the entire Limerick team and both Seamus Hickey and Shane Dowling will know that only too well.

Winning these awards brings personal satisfaction but deep down they will know that winning an All Ireland medal at senior level is the ultimate priority for this group of Limerick hurlers. They are within touching distance and I would expect them to push forward with a real cutting edge in next year’s championship.

For some years I have written on this paper about Seamus Hickey’s best position, most people with any knowledge of hurling would have said that he is best placed at corner back. He of course had form in this position and it was a major surprise to see both Donal O’Grady and John Allen play him out of position. I called their decision to do this into question on quite a few occasions but they for some reason saw nothing wrong with playing one of the best defenders in the country out around midfield.

Hickey has massive pace, his footwork makes him an ideal corner back in the modern game and this was proven this year. He is the well suited to do a man marking job, he seems to flourish in this role.

I think it can also be said that the Murroe-Boher man has learned some lessons from his earlier years, in that this year we didn’t see the long looping runs up field. For the best part many of those runs ended with little return and handed the ball back to the opposing teams. Hickey has developed and matured this season and we can expect more from him in the years ahead.

The coming of Shane Dowling has been well flagged for some time, from his very early days with his club Na Piarsaigh we could see he had great hands and good vision. He is still very young in senior intercounty hurling terms but I think he took a major step forward in this year’s championship. He has become our go to man in the forwards and most defenders will know that he takes a fair bit of minding.

He had some very good games at full forward in this year’s championship and what I liked most was his ability to be a real threat in the air. He made the full back work for everything he got but more over he won some great possession and that was something Limerick lacked in that part of the pitch for some time.

In all of the games played with Limerick this year Dowling posed big problems and asked questions of all of the full backs he met. It was for that reason that he was chosen above others. To get a place on the final fifteen of this year’s All Star team was difficult so unless you had delivered on a few occasions on championship days you had no chance of such an honour.

Winning such awards are good for the players involved but Limerick as a team now need to build on this year.

They are now a top four team and that will bring its own pressures. Limerick will get out of the Division 2 of the National League next year because I don’t see any reason why they should not. Waterford will have to find many new players and while Limerick has to go to Wexford Park to play Wexford I think it can be said we are a fair bit ahead of them.

The rest of the teams in this division won’t hold many problems for Limerick and those games must be used to develop new players. The subs bench has to be developed and some new talent will be required both in defence and attack if Limerick is to be in Croke Park next September.

Other Limerick players were also nominated for All Stars and I felt Paul Browne was very unlucky not to have got the nod for midfield. Browne had a good year but the fact that Shane McGrath had such quality games nearing the end of the championships swung it in his favour.

Limerick has some players now to challenge the very best in the country, this has been the case on many occasions in the past but I hope this group achieve what they are capable of in the very near future. From now on it’s about taking the opportunity when it comes your way for this group because others just like them didn’t get a second chance.

IN time it might well feature in a quiz as to who were the County Junior hurling champions in Limerick in 2014.

For seven minutes Na Piarsaigh were living the dream as champions but it all turned sour when County Chairman Oliver Mann took hold of the microphone and told the attendance that on “count back” the game had finished level. Never before had such words been used in GAA speak and it was as much as a surprise to Feohanagh Castlemahon as it was to Na Piarsaigh.

On watching the video it was clear that the referee confirmed twice to the lines men when asked about the score and on leaving the field he made it known that Na Piarsaigh were the winners.

This was a mess and it wasn’t helped when the County Board Chairman Oliver Mann took it upon himself to go to the referee’s dressing room, this is not normal practice and if he wished to do so then he should have asked the Chairman of both clubs to accompany him.

The scoreboard was wrong. The game had finished level but referee Paddy Lyons a very new recruit could have handled this matter much better. I am sure Na Piarsaigh would want only to win this game on the field but if they chose to take their upset to higher office they might have a very strong case.

Limerick know well from last year’s debacle with Hawke Eye how difficult it is to change what happens on the field and if wise they will find a way of solving this unwanted problem.

Many games are now running late and one only has to see what is happening at minor level in hurling. Many of these championships need to start much earlier.