Martin Kiely Column - Limerick hurlers have a lot to work on 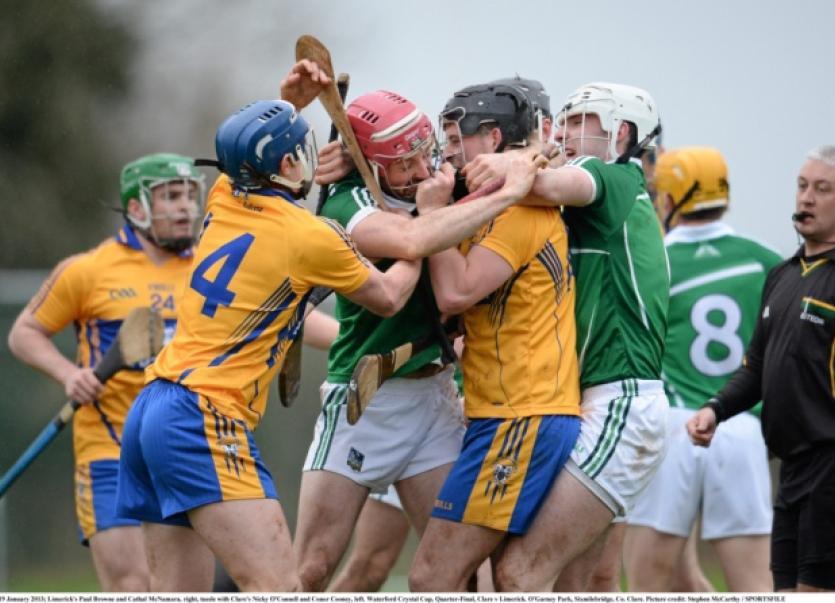 The start of the hurling year for Limerick got underway in a real way in Sixmilebridge last Sunday as the senior hurlers took on the All Ireland hurling champions.

It wasn’t the prettiest day for hurling but it seemed it mattered little to the young guns of Clare who showed this county has a production line in place as their team had only one player from the All Ireland team, Pat O’Connor, in their starting line up.

Limerick had seven of their championship team on view but as a unit they struggled to contain a Clare team that showed pace and skills with regularity. The sort of hurling they played showed those coming through are playing to the same plan as the those above them and this will keep the Clare flame lit over the next few months.

What last Sunday proved is that Clare has a war chest of players coming through and the future for the county looks really good. Clare were in the dressing room more than an hour before the game whereas Limerick were late and that always sets the wrong tone for players and the game. It’s very early days, I know, in the hurling year but small things do make the difference and Limerick will need to get them right in the weeks ahead.

Very few of the Clare people I met before the game expected to beat Limerick given the strength of the Limerick outfit but from the very start of the game it was clear Clare were not just there to make up the numbers.

The passion and work rate of the Clare team were outstanding and it’s obvious the culture in the county is geared towards doing the simple things well and with great speed. The Clare players, as one of them told me after the game, are making huge sacrifices and if you want to be a part of what they do then you must be prepared to work exceptionally hard. Limerick appeared to be under huge pressure from the opening minutes, they could not manage at all the way Clare were running at them and when it came to tackling Clare were like small dogs that hadn’t been fed in a week such was their hunger and work rate.

Some might say that this game was of little importance but I wouldn’t agree too much with that because Clare showed us last Sunday that once again they are running a professional set up and everyone concerned is left in no doubt that they have high expectations and nothing is left to chance to make sure the best possible outcome is achieved.

It took Limerick eight minutes to record their opening point from a free by John Fitzgibbon and the same player landed a second again from a free close on twenty minutes. It showed how dominant Clare was and to be honest given the amount of possession Clare had they should have won the game by an even bigger margin. Many of the Limerick players struggled to win their own ball but they also showed quite a bit of indiscipline, this happens when teams and players are finding it hard to cope with the nature of the challenge from the opposing team.

Limerick were fire fighting for the majority of this game and really at no stage were they in a position to seriously challenge Clare. The indiscipline of Limerick secured many points for Clare and young Bobby Duggan who, as a player, has developed a lot in recent months.

The pitch in Sixmilebridge, despite the weather, was a credit to the local club but what impressed me most about this second string Clare team was that conditions didn’t seem to matter to them at all, on the ground or in the air it mattered little, they took it whichever way it came and that is a great quality in a team but most of all in the player.

Clare moved the ball with huge pace and the understanding they had left Limerick catching shadows. Despite being All Ireland champions Clare were back hurling in early December and that was clear to all last Sunday because their first touch was superior to Limerick who are well behind Clare in hurling terms at this stage.

Such was Clare’s domination of this game it would be hard to find a seed one could cling to but it brings into focus the Cork game in a few weeks time and this will be a very important game for Limerick.

Winning brings good habits and I would hope we don’t see the same type of performance in the weeks ahead and in fairness to the players they won’t need anyone to tell them that with the Cork game coming in a few weeks.

Limerick included two of the minor team from last year which started against Clare last Sunday and I would question throwing these lads in so early, both Richie English and Daragh O’Donovan have a bright future but that will only start to grow once they have done a hundred plus sessions and acquired the condition to survive at this level. What we do know is that Limerick have gaps to fill and winning the opening National League game would provide a comfort level that would allow players get time on the field and a chance to develop because that has not been done over the past two or three seasons.

Raising questions about the Clare style after the game backfired on Limerick and did we really have to wait till last Sunday to know how Clare play? The Banner boys have cultivated their own style of play and rather than question it Limerick would be better off coming up with their own because such comments showed a real lack of maturity.

The next three weeks are now free for Limerick to focus on the Cork game and they will need to be going well for that encounter. Cork have many dual players back and their squad overall has been strengthened greatly in recent weeks.

Last Sunday was a damp enough day for hurling but a fine crowd turned up in Sixmilebridge to witness the start of the New Year, the game against IT Tralee was a joke and that was confirmed last Sunday. Nothing was learned from it.

The new Limerick jersey did look well last Sunday and let’s hope from now on they will get the right results, last Sunday’s game wasn’t the end of the world but lessons will have to be learned from it by all.

A very big crowd turned up for the funeral of former politician Peadar Clohessy who passed away last weekend.

He played for many years in the Fedamore full backline and gave great service to the club. He was the nephew of the former Limerick greats Paddy and Dave Clohessy who had sparkling careers with Limerick in the thirties.

He was better known as a politician but Peadar Clohessy was proud of his native place and proud to have played the game of hurling. To his family I offer my sincere sympathy.