Let witch hazel put a spell on you 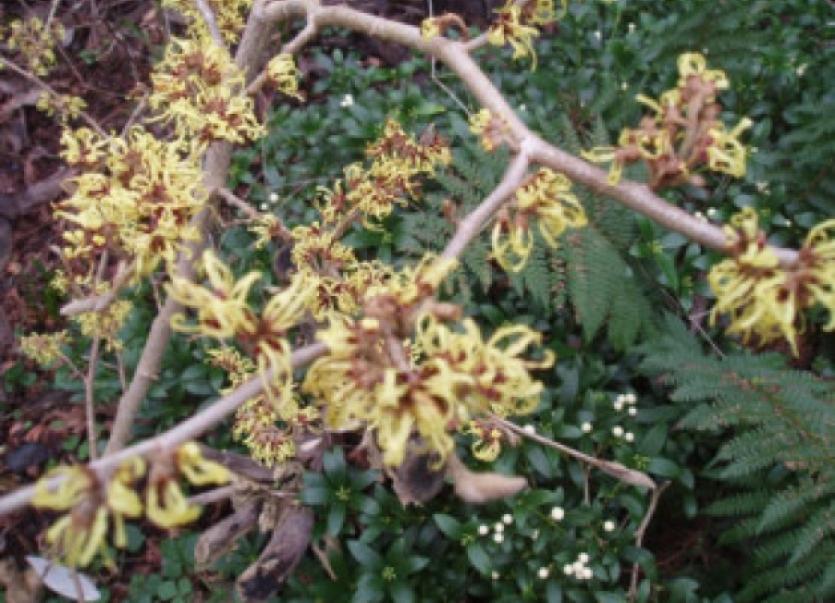 Hamamelis can brave the cold weather in the depth of winter to produce flowers with an intoxicating scent. The flowers are tucked in clusters along the naked branches of the shrub. Hamamelis resembles the common hazel, which was used for water diving and has a reputation for its healing powers.

Hamamelis can brave the cold weather in the depth of winter to produce flowers with an intoxicating scent. The flowers are tucked in clusters along the naked branches of the shrub. Hamamelis resembles the common hazel, which was used for water diving and has a reputation for its healing powers.

These properties gave the plant its common name, witch hazel. It is a versatile shrub that can be used to add height to the back of the border, creating a splash of colour during the winter months. The leaves also offer spectacular colour in the autumn.

The leaves produce autumn colour that can match any Japanese maple when the large hazel leaves become a cloak of orange and purple at the end of the year. Witch hazels are hardy shrubs whose flowers can survive frost and even bitter winds. For cheerful company at the end of winter or early spring, try a carpet of nodding snowdrops beneath the lower branches of witch hazel.

Grafting is the only way to propagate witch hazels, which unfortunately increases the cost of production. Autumn is generally the best time to plant witch hazels. All hamamelis will grow into large shrubs, often more spreading than tall. This makes it important to plant witch hazels in the correct position because they do not like being pruned regularly to restrict size. The only pruning they require is to remove dead or dying wood. They are slow growing, often painfully slow in the first few years, but it is best to give them plenty of room from the start. They need an acid soil or a neutral soil with lots of compost added to it. They can also be grown in a large pot provided they are kept watered and given a liquid feed in summer. Dig out a large planting hole and add a generous amount of well rotted manure or compost. Plant at the same level they were growing in a pot, because grafted plants will often produce suckers if planted too deeply. Water well after planting and finish by putting a layer of mulch around the base.

After enjoying the colourful stems of Cornus (dogwood) over the winter now is the time to prune it. Prune stems down to a few inches above the ground and new shoots will sprout from the base to produce new stems which you will enjoy again next winter, like many things in gardening you have to be cruel to be kind. Now is the time to plant new dogwood plants. There are many varieties to choose from, you may have red or golden stems or variegated leaves.

Bare rooted trees, shrubs and roses should be planted as soon as possible before soil temperatures start to rise.

Cover an area of the vegetable garden with a sheet of plastic to warm the soil for an early sowing of onions, garlic and parsnips since these like a long growing season.

If you want hostas with wonderful lush leaves this year, now is the time to feed them. Mulch with a liberal dressing of well rotted manure or compost before the new leaves unfurl.

Cut lawns when the grass is dry. There is normally a bit of grass growth during the winter so it may require two cuts to remove the large amount of grass. Use a high setting for the first cut. Apply sulphate of iron dissolved in water to kill the moss.