After seven miscarriages and a lost baby comes ‘miracle’ Ellianna 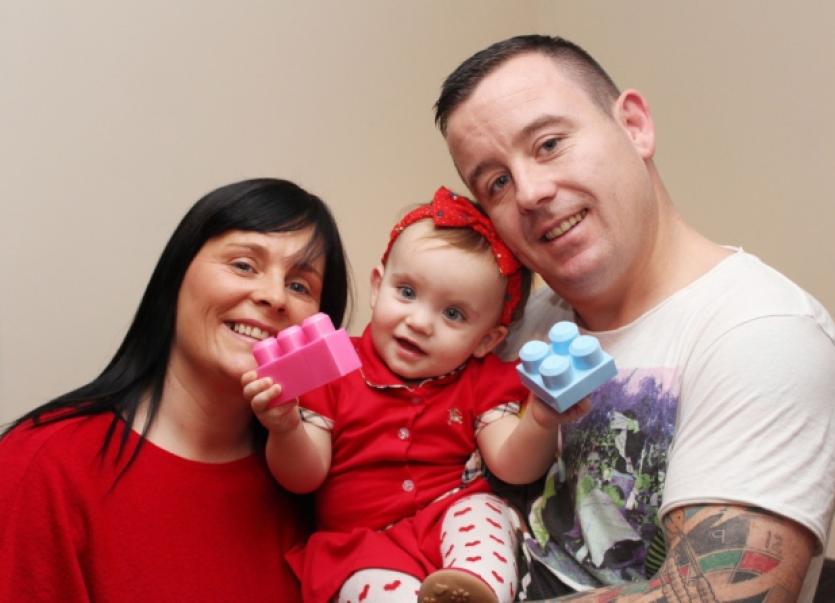 A COURAGEOUS Limerick couple who had seven miscarriages and a baby who died shortly after being born, want to give hope to others after having a beautiful little girl.

A COURAGEOUS Limerick couple who had seven miscarriages and a baby who died shortly after being born, want to give hope to others after having a beautiful little girl.

After an unimaginable nine years for her parents, Ellianna Hope Marie Thompson will be 18 months old next week. Ellianna means ‘God has answered me’.

Proud mum and dad, Noreen and Ger, who live in Murroe, have told their story to help those who have had miscarriages.

On Sunday, Ger was asked to speak at the annual remembrance Mass for babies in the Holy Rosary Church on the Ennis Road. He did so through “a fog of tears” and Noreen said the “whole church was sobbing”.

“Like all couples we thought it was a case of not if, but when we would have our first baby. We couldn’t have been more wrong and Noreen and myself would face a nine year, almost 10 year battle.

“I remember when Noreen told me the first time she fell pregnant. We were the happiest couple in the world but it was short-lived and Noreen suffered an early miscarriage.

“As you could imagine we were both devastated so we slowly got back to normal life and it wasn’t long, maybe a few months or so, before Noreen fell pregnant again. This pregnancy also resulted in a miscarriage,” said Ger.

Then there were complications following a procedure on her womb. She had to have emergency surgery to correct a perforated bowel and uterus.

“I couldn’t believe this had happened, as if the miscarriage wasn’t hard enough to deal with - now she had massive surgery to get over too,” said Ger.

Noreen was told when she woke up that she had nearly died.

It would take them over a year to recover from this “nightmare” both mentally and physically.

“Over the next number of years Noreen fell pregnant another three times. We suffered early miscarriages, never making it past the first trimester.

“Noreen’s sixth pregnancy was different but the result was no better. She went to the hospital in some pain and discomfort. The pregnancy was ectopic.

“Noreen was sent to University Hospital Limerick where she had to undergo a medical termination. It was almost like it was normal life dealing with loss at this stage and we were getting weary from it, but nothing in the world would prepare us for what was to come. If this life story could get any worse, it did.”

In their seventh pregnancy they went home with their first picture of a baby after a three-month scan.

“We were more than delighted and felt the winds of change had shifted in our favour. We were flying,” said Ger.

However, during a holiday in Cork, Noreen got pains and went into labour at just 22 weeks.

“The nurses and doctors informed us that our little baby would not survive once delivered and baby Kayla Elizabeth Thompson was born at around 5am.

“She let out three little cries and every time I put my head down, even to this day, I hear them. I heard them last night and I will hear them again tonight.

“Kayla passed away shortly after being born at just under 1 lb. I could hardly believe this had happened, it was like I was outside myself looking in,” he said.

At this stage they thought “never again”.

“It was just too hard,” Noreen says. But the couple found the strength to continue and Noreen fell pregnant again. She miscarried near Christmas.

On the ninth occasion the pregnancy reached three months but there was no excitement at the photo of the scan.

At 16 weeks Noreen was taken into the University Maternity Hospital.

After being in the neonatal ward for two and half weeks they brought her home on June 6.

“We couldn’t be more grateful for what we have or more thankful. It’s been almost a 10-year fight. Noreen is an amazing woman with great courage and I hold her head and shoulders above any other woman I know. She is a rock and I will be forever in her debt for giving me my daughter. I love and admire her,” said Ger.

After the Mass on Sunday, Noreen said one couple came up to her.

“They said we were after giving them hope and that made me happy walking out. It was nice for them to say. Some people just give up after one or two miscarriages because it is so heartbreaking,” said Noreen.

But how did the Thompsons keep going?

“Ger said to me ‘It’s not fair on you’ but it was me more so because I was so determined. It was something that I really wanted. I put a limit on it and I said if I didn’t have one before I was 40 that we would give up. I turned 40 last April and we already had her,” smiles Noreen. And she will never forget the moment she saw Ellianna for the first time.

“I had to go for an emergency section. When I was brought down to her in the wheelchair about eight hours later, after me being under, I couldn’t believe she was mine.

“She had all these tubes but they said I could hold her. I will never forget the feeling when they put her in to my arms. She is the greatest miracle ever. I thought someone was going to come and take her away from me. It took me three or four days to believe the baby was mine. We never thought we would have one, she is amazing,” said Noreen.

They hope by telling their story it well help others.

After Ellianna was born the couple vowed to raise money for the neonatal unit.

“The doctors and nurses in the University Maternity Hospital are absolutely amazing. I was in there for months and they treated me like family. They are overworked and underpaid,” said Noreen. The couple wished to thank gynaecologist Una Fahy and bereavement counsellor Cathy Quinn.

Despite not being able to run a km in January Ger vowed to run the Dublin marathon. He called it Ger Thompson’s runs for Kayla and they have raised over €6,000 to be divided between the neonatal unit and Irish premature babies.

“We would like to thank everyone who supported us. We had a fundraiser in the Kilmurry Lodge, who gave the room for free, as did the band Charisma and DJ David Madigan. Local businesses gave us spot prizes and Castletroy Physiotherapy Clinic kept my legs running,” said Ger, who also wished to thank Mark O’Dwyer for his nutrition plan and Rachel Murphy and Jason Daly, who ran the marathon with him.

“Ellianna has changed our lives,” they smile as their happy little girl plays with a toy, not knowing just how special she really is.