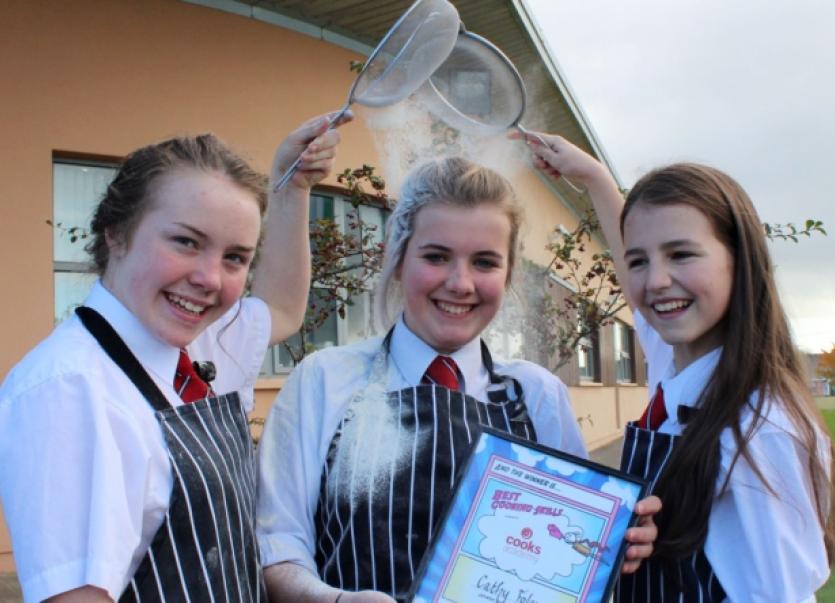 A BROADFORD teenager has tasted culinary success after she won a top prize in a national amateur cooking competition (see picture on the front page).

A BROADFORD teenager has tasted culinary success after she won a top prize in a national amateur cooking competition (see picture on the front page).

Cathy’s Indian butternut squash curry knocked the aprons off of celebrity judges Catherine Fulvio and Kevin Dundon at the Cooks Academy cookery school on South William Street last Saturday. Cathy and fellow Hazelwood students Neasa Fahy and Meadbh McCarthy, both aged 12, were shortlisted to take part in the final of the national competition, after their dishes beat off competition from hundreds of amateur bakers of all ages.

Hazelwood College home economics teacher Noreen Daly said that Cathy, Neasa and Maedbh have done their school and the local community proud. “We’re delighted and thrilled. The girls worked really hard on their dishes, and they couldn’t have done any better on the day.”

Ms Daly added that the girls’ efforts showcased their considerable talent, creativity and cooking skills. She said that their success in making it to the finals of a national competition, which saw them competing against older and more experienced cooks, made their achievements even more impressive. “They’re all great ambassadors for their families and the school. The judges were really impressed.”

The trio were selected to join 27 other finalists in the competition, which saw three dishes in ten different categories chosen to make it through to the national final.

As well as Cathy’s curry, Neasa prepared a bacon surprise with beetroot and feta cheese skewers, while Meadbh made a dish of lemon chicken.

Last Saturday the girls cooked their creations for the celebrity judge panel, and the winners in each of the ten categories were announced at a gala event at the Shelbourne Hotel in St Stephen’s Green on Saturday evening.

The awards event, which was presented by TV3’s Martin King, was recorded for television and will be broadcast this Saturday, November 16.

A total of €1,500 in prizes was on offer in the competition, which was sponsored by Easy Food magazine. Among the prizes up for grabs were kitchen appliances, restaurant and supermarket vouchers, kitchenware, utensils, hampers and a weekend break.