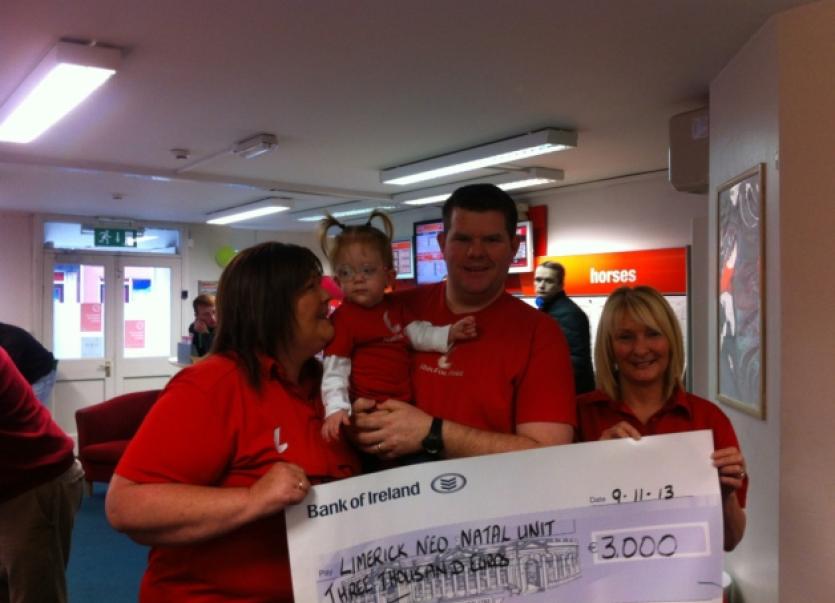 BOOKIES usually don’t like paying out, but staff at Ladbrokes in Kilmallock were only delighted to hand over a cheque of €3,000 which will go towards the care of newborn babies.

BOOKIES usually don’t like paying out, but staff at Ladbrokes in Kilmallock were only delighted to hand over a cheque of €3,000 which will go towards the care of newborn babies.

The funds, which were raised locally, were presented to baby Aimee Hennessy and her family, and are to be donated to the neonatal unit at University Maternity Hospital, Limerick.

Aimee received national attention in January of 2012 when she was born weighing just 1lb 5oz after arriving three months premature. She spent 130 days in neonatal care at the Ennis Road hospital.

Members of Aimee’s family and colleagues of Aimee’s father, John Hennessy, joined staff of Ladbrokes in the Great Limerick Run to raise funds for the unit. Aimee’s grandmother, Philomena Hennessy, who works as a customer service manager in Ladbrokes in Kilmallock was thrilled that they agreed to support the good cause.

“In each shop, Ladbrokes sponsor their own charity. We were above one day and I was discussing it with Tracy Moloney [marketplace manager]. She said we would try to get them on board and sell the lines in the shop. They said ‘no problem’,” Philomena explained.

“We are so grateful to everyone who supported the event and we hope to make it an annual event.”

Philomena, Tracy and Linda Buckley - a customer service manager - also organised a benefit night at the 41 Bar in Kilmallock.

“Paudie O’Brien donated his Limerick jersey from the league final and we got a signed Kerry jersey and loads of spot prizes from all the business people in the town. We had a raffle and there was music by Dave Heffernan, John O’Connell and DJ Mossie. There was an awful lot of money raised by friends and family as well,” Aimee’s dad John explained.

His little girl, he said, is “doing great” as she prepares to celebrate her second birthday on January 6. “She is walking, talking and meeting all her milestones and is ahead on some of them. It is down to the good start at the hospital - they showed us how to look after her.”

Aimee is being assisted by an early intervention team at St Joseph’s Foundation who help her with physiotherapy, speech and language.

“They are excellent,” said John.