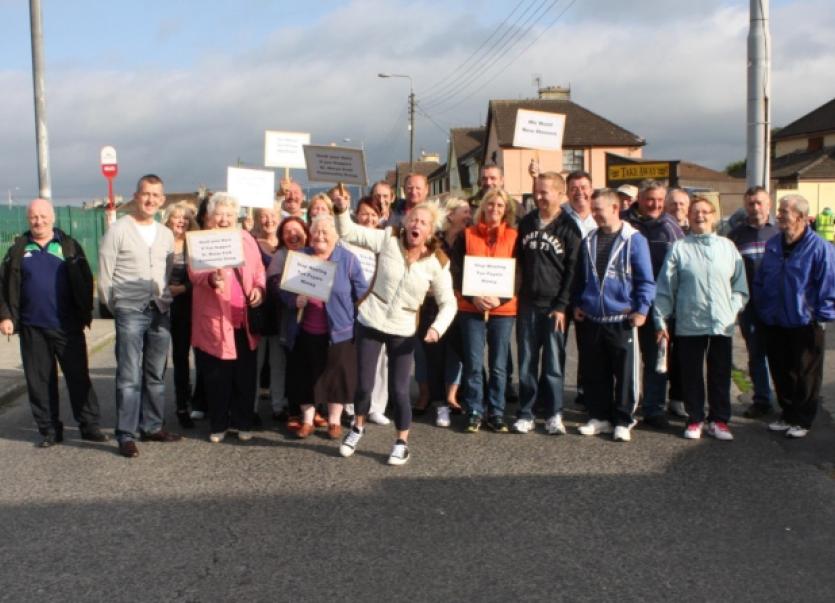 RESIDENTS of St Mary’s Park came out in force this Wednesday to protest against Limerick City Council’s management of the regeneration plan.

RESIDENTS of St Mary’s Park came out in force this Wednesday to protest against Limerick City Council’s management of the regeneration plan.

It follows the mass resignation this week of St Mary’s Park Community Group – which attempted to liaise between the community and the council over the alleged failure of the local authority to provide answers on the redevelopment of Limerick’s oldest council estate.

Pressure on the public finances mean the ambition of that project has been scaled back. And where the original masterplan provided for the demolition and rebuilding of the whole estate, the focus now is on refurbishment. Carmel Duggan, who has resigned as secretary of St Mary’s Park Community Group, said the decision not to demolish and rebuild every home, many of which date from the 1930s, was regarded as “a broken promise”. So old are the concrete dwellings, she said, that the community doubts they can be refurbished in a cost-effective way.

But more recently constructed houses were being knocked, Ms Duggan said. A row of brightly painted homes on St Munchin’s Street known locally as “The Tellytubby Houses” were earmarked for demolition despite “being structurally sound and only there 10 years”.

“When we get asked questions about this, we look to the council for answers but can’t get them. We are told houses won’t be knocked because they won’t get permission to rebuild on a floodplain and then they see newer houses that are being knocked. There are other issues that we are bringing to them like the decrease in value of homes and Limerick City Council only giving out a pittance to those who are prepared to move,” Ms Duggan said.

People who agreed to move out could get a sum of around €35,000 for an average home in St Mary’s Park and then become tenants of Limerick City Council having lost their asset, Ms Duggan said. This was a far remove from the original promise that people on regeneration estates would get “a house for a house” and stay in their own community.

St Mary’s Park Community Group stated in resigning this week that it no longer had “confidence in the current regeneration process and believes that the process has gone backwards since Limerick City Council has taken charge” over the past 12 months.

Oliver O’Loughlin, director of service, home and community, Limerick City Council, accepted that the original plan had been to demolish all homes in St Mary’s Park but added that “the Office Of Regeneration, and indeed the Regeneration Committees, have also acknowledged and accept the pressures that both the public purse and the housing market are under”.

“With this in mind our office has worked closely in consultation with the community and relevant committees to revise the original plans so that a practical and implementable programme can be delivered.”

Monthly meetings had been held in the community, Mr O’Loughlin said, at which these proposals had been discussed and agreed upon. Following further engagement, Limerick City Council had received exactly 100 submissions from the local community on how the redevelopment would proceed and these would inform “framework implementation plans” to be launched in the next six weeks, Mr O’Loughlin said.

Parish resident Cllr John Gilligan said the St Mary’s Community Group were not a group who had set up in opposition from the off but had tried to engage positively with first the Regeneration Agency and then Limerick City Council.

“I have kept making the point they are making that these houses are there since the 1930s, that the cement used in their construction only has a lifespan of 70 years and the houses should have been knocked and rebuilt long before now. The residents were promised a key for a key but nothing has happened since,” said Cllr Gilligan, who said he felt “let down like the residents” and would be taking their frustrations up with officials at a meeting scheduled for this Friday. Cllr Maurice Quinlivan, who attended Wednesday’s protest, said he looked forward to hearing from Limerick City Council on Friday how it would “restore these people’s confidence in the regeneration process”.

Minister for Housing Jan O’Sullivan, meanwhile, said she had been proud to represent St Mary’s Park since 1985.

“There has always been a great sense of community there with people very committed to their area and I would hope they can find a way of re-engaging with Limerick City Council on the plans,” she said.