Street meetings in Limerick as opposition to charges intensifies 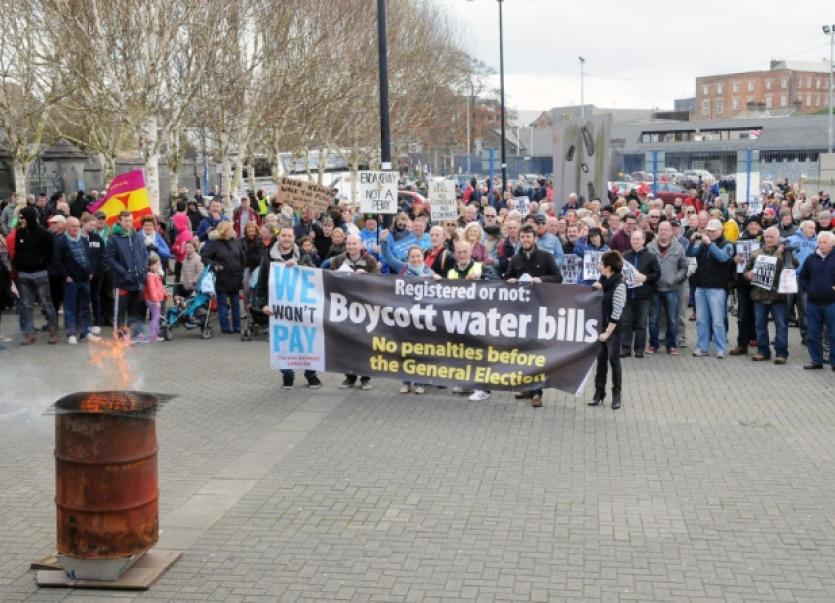 THE anti-water charge movement in Limerick is to hold a series of street meetings, after hundreds of people joined a protest rally in the city.

THE anti-water charge movement in Limerick is to hold a series of street meetings, after hundreds of people joined a protest rally in the city.

As water bills are issued to houses in Limerick, the Anti-Austerity Alliance and the We Won’t Pay campaign led a march against the charges from City Hall on Saturday.

This was followed by a public rally in the St John’s Pavilion on Mulgrave Street, where it was agreed to intensify efforts with 13 ‘street meetings’ scheduled to take place in the next fortnight to outline opposition to the charges.

This Tuesday night, street meetings will take place outside Corpus Christi Church in Moyross, with another meeting in Singland, beside the local school.

On Wednesday, meetings take place from 6.30pm outside the Grove Island Shopping Centre, and then 90 minutes later in Westbury, meeting by the Applegreen garage.

On Thursday, campaigners will gather from 6.30pm by Galvone School in Roxboro, and at Our Lady of Lourdes Church.

And on Friday, street meetings take place in Thomondgate, opposite Topaz and at the North Circular Road. More will take place next week in Ballycumin, Caherdavin and Garryowen.

The meetings will see anti-water charge campaigners travel door to door to persuade people not to pay for their water.

He claimed it was the “biggest public meeting in Limerick since the launch of the Progressive Democrat party”.

Former mayor Joe Harrington said: “Water charges were beaten before in the nineties by mass campaigns of non-payment. Those movements stood candidates in elections and won breakthroughs. The movement today against water charges is more significant than any of those. It is borne from seven years of unrelenting austerity.

“This movement could not only sink water charges and strike a blow against austerity, but is the opportunity to build a new political alternative from below for working class people.”

He said: “We have seen the biggest movement of working class people in decades. Hundreds of thousands have come out to protest – thousands more today in Limerick. Now, with the bills going out, we are at the decisive point of the campaign. Whether people are registered or not, people can unite and boycott the bills. The most powerful protest available to people is to refuse to pay and give confidence to friends and neighbours not to pay.”

Sandwiched between the Limerick meetings is another anti-water charges rally in Dublin. It is due to begin at the Garden of Remembrance at 2pm this Saturday, April 18.