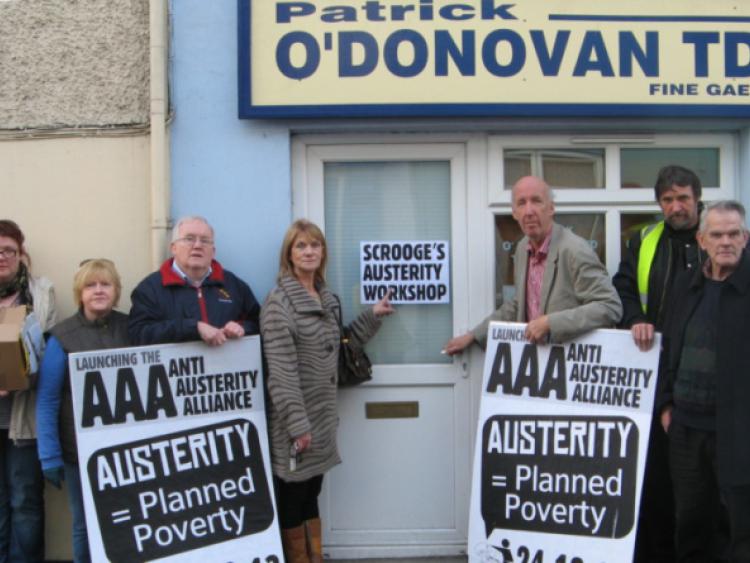 THERE was little by the way of festive cheer in Newcastle West last Saturday when a number of anti-austerity campaigners picketed the office of local Fine Gael TD Patrick O’Donovan, dubbing it “Scrooge’s austerity workshop”.

THERE was little by the way of festive cheer in Newcastle West last Saturday when a number of anti-austerity campaigners picketed the office of local Fine Gael TD Patrick O’Donovan, dubbing it “Scrooge’s austerity workshop”.

Former mayor of Limerick Joe Harrington and Kathleen Enright, who are standing for the Anti-Austerity Alliance in county Limerick at next year’s local elections, led a number of cars and vans on a protest route through Rathkeale and Newcastle West, targeting the offices of Mr O’Donovan and his Fine Gael colleague Dan Neville TD.

Mr Harrington said that the protest was aimed at encouraging voters to “take the opportunity to deliver a hammer blow to Fine Gael, Fianna Fail and Labour, and pay them back for the savage attacks they have made on people’s wages, conditions and services, while the wealthiest section of the population have actually become richer”.

Mr Harrington is standing for election in the recently-enlarged Newcastle West electoral area, while Ms Enright has been nominated by the group to contest the Adare-Rathkeale electoral area. The group, which is running a number of candidates across Limerick city and county, is calling for the abolition of the property tax, water charges and other levies on household services.

Mr Harrington, who previously served as mayor of Limerick during his time as an Independent socialist councillor in the city, has already stated that he hopes unhappy voters can mobilise into a “militant” voting force.

“The reason we’re standing is not because we think the council are going to sort matters, but to pull together all the people opposed to the present policies that are doing down the working class, and organising them as a fighting force that can become a movement. We want to get people organised, militant and to stand up for themselves.”

He added that the local elections will be an opportunity for unhappy voters to “get our own back” on the Government parties.

“I have been motivated by the betrayal of Labour and Fine Gael, who promised change but have failed to deliver. In fact, they have shown themselves to be no different to Fianna Fail. They have used the most draconian bully boy tactics to force austerity and the property tax down people’s throats. But next year’s local elections provide us with the opportunity to get our own back.”

He added that there remains strong opposition among the West Limerick public to septic tank inspection charges, water charges and the property tax. He described the imposition of these charges as being part of a “gravy train”.

Despite the difficult odds he is facing to be elected in a competitive six-seat Newcastle West constituency, where Fianna Fail and Fine Gael are targeting at least three seats each, Mr Harrington said that his time with Limerick City Council, particularly his experience with the anti-water charges campaign in Limerick in the late 1980s and early 1990s, will be an asset.