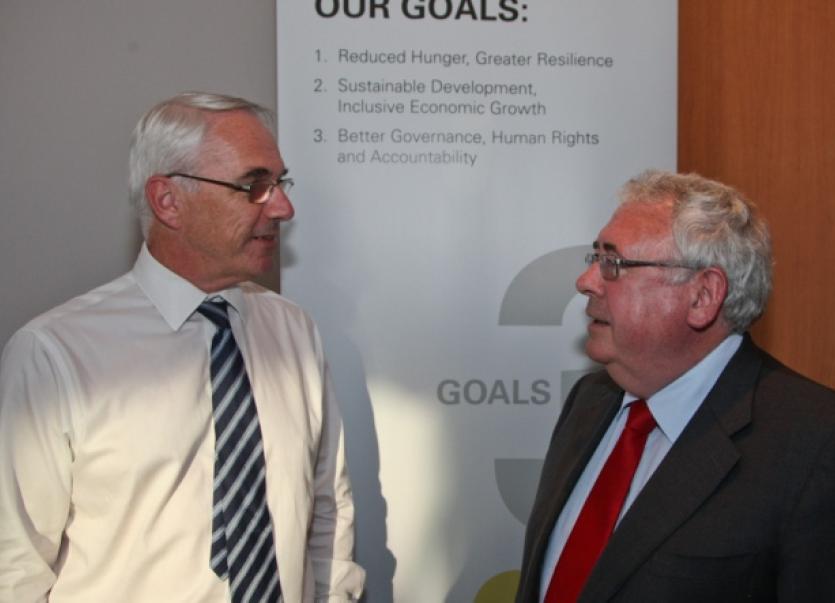 STAFF numbers may have reduced by around a third since it opened in 2009 but the Irish Aid office on Henry Street has a secure future for now, according to Minister of State for Trade and Development Joe Costello.

STAFF numbers may have reduced by around a third since it opened in 2009 but the Irish Aid office on Henry Street has a secure future for now, according to Minister of State for Trade and Development Joe Costello.

“We have no plans to change it during the lifetime of the current government,” Minister Costello said almost exactly a year after he announced his intentions to review expenditure associated with travel by staff between Dublin and Limerick.

Labour in opposition was vocal in its criticism of Charlie McCreevey’s decentralisation plan under which this branch of the Department of Foreign Affairs moved to Limerick four years ago. Two of the three political heads of Irish Aid since then - Peter Power and Jan O’Sullivan - have been Limerick city TDs but Minister Costello’s remarks on decentralisation last year raised concerns locally about the viability of the Limerick office.

He was commenting on the costs of staff travel between Irish Aid’s Limerick base and its parent department in Dublin - and accommodation and subsistence costs for the same personnel.

“It is one of the silliest decisions ever made and it is one that we unfortunately inherited,” he told the Irish Independent last August.

“I am not sure how we are going to rectify it because we have a lease on the property in Limerick (until 2028) but I have asked for a full review of the situation. In the short term, we are going to have to accept the associated travel costs,” Mr Costello added.

Regarding the “silly” nature of the decision, Minister Costello insisted this week he was talking about decentralisation generally and not the DFA move to Limerick specifically.

“I was talking about the policy in general. The policy was ill-thought-out; it wasn’t focused in a rational fashion. But in relation to Irish Aid, the situation is we have slightly restructured things. The Department of Foreign Affairs of course has its headquarters in Dublin. My ministry is now the Ministry of Trade and Development. The trade side of that is all in Dublin and the development side is divided between Limerick and Dublin. There’s a 2:1 ratio. There’s about 86 people based down here and less than 50 in Dublin in the core department. So most of the operation is here in Limerick and we have no plans to change it during the lifetime of the current government. Maybe that puts it to rest,” Minister Costello said.

Just under 90 staff in Limerick is some way off the 140 Fianna Fail announced would be based at the Limerick office when it opened. They were to contribute an estimated €10 million annually to the regional economy.

When the office was formally opened, just over 60 were DFA staff who had relocated from the capital while around the same number had moved from other departments, many of them civil servants who were already working in Limerick with the Revenue Commissioners, the Department of Agriculture and others.

Minister Costello said the costs associated with travel between the two offices were going in the right direction.

This was not only for travel but what Minister Costello described as “the overall connection between the two areas “.

“And the more we reduce that, of course, the more viable Limerick becomes,” he added.

“There is a 2:1 ratio there and that has been the way things have been since I have started - and there has been no attempt to diminish in any way the operation in Limerick.”

Coffee shop owners in the Henry Street area, he said, could be “assured that during my time there, which hopefully will be another two-and-a-half years, there will be no change with the Limerick office”.

Minister Costello was speaking at the Clarion Hotel where he addressed a public meeting on the evolving nature of Ireland’s trade and development policy in relation to the developing world.