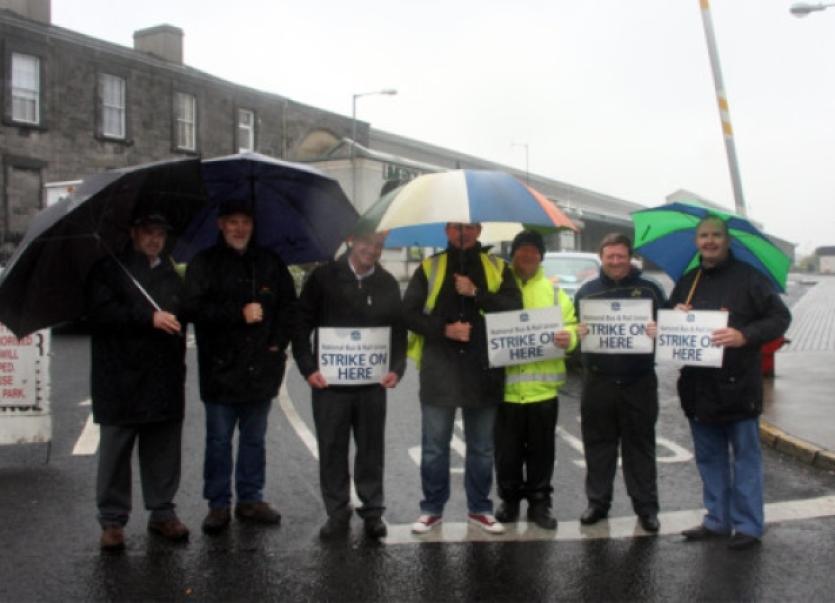 THOUSANDS of people across Limerick are facing a second day of disruption today as a strike action by bus drivers continues.

THOUSANDS of people across Limerick are facing a second day of disruption today as a strike action by bus drivers continues.

Commuters, school and university students facing exams, and visitors to the regional hospital have been left without public transport as a result of the strike action by members of the National Bus and Rail Union

Part of a national action, workers are demonstrating against cost-cutting plans which the union say will cost drivers between €70 and €80 per week.

No buses operated in Limerick yesterday, and the NBRU are to continue their strike until they reach an agreement.

Bus Eireann said the strike - which will cost it €200,000 daily - could put the firm out of business.

Members of the other union with staff at Bus Eireann, SIPTU, have refused to cross two pickets set up at the bus station, and the bus depot in Roxboro.

Eurobus is putting on extra services from William Street to help stranded passengers to Castletroy and Annacotty while JJ Kavanagh, Citylink and Dublin Coach are adding extra capacity on existing services from Arthur’s Quay and Henry Street.

But Citylink said it will not be able to pick up passengers at its regular stop in Raheen bound for the centre, because it is not licensed to do so.

Teachers and student representatives have criticised the action.

But Dermot Healy, local NBRU representative, said it has been “foisted upon us” after not enjoying a wage increase since 2008.

“It is regretful management has forced us into this position where we are going to inconvenience people,” he said, “We didn’t look for this. But when management tell us they are going to cut your pay from a certain date, you are left with little option.”

School transport is expected to operate as normal.

Cllr Tom Shortt, a teacher at Scoil Carmel, said the timing was “unfortunate”.

“It is a crucial period in the education system for many students caught up in examinations. The reality is, many use public transport to get into the city.”

Adam Moursy, president of UL’s student union said many people remained on campus this weekend, rather than go home to see family, saying: “For anyone who has an exam on Monday, it is really stressful for them. The catchment of UL is so big: we have people from Sligo and Donegal.”

Jude Williams, Treaty Cabs has confirmed his own firm has been busier catering for stranded passengers.

Cllr Leo Walsh said workers in Limerick do not have the money to continually get taxis instead of buses: “It is a huge loss to people, particularly for the elderly people who want to get to church. It is a pity they did not sit down and talk,” he added.