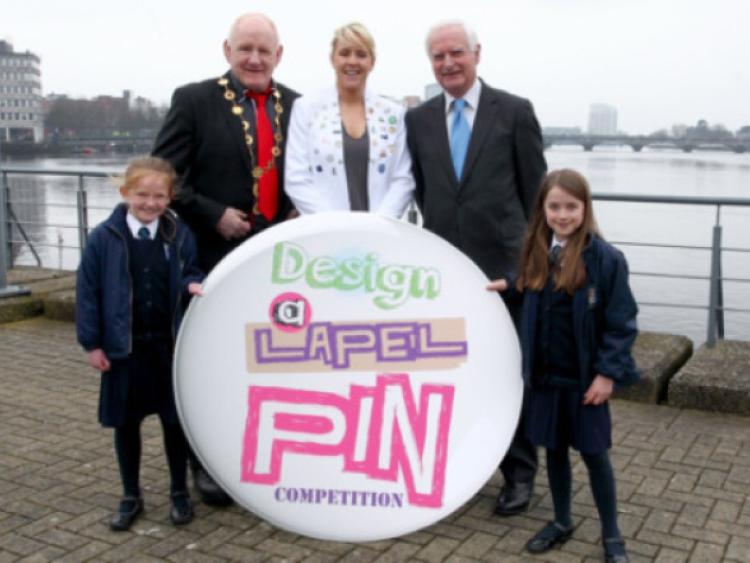 Going for Gold launched its latest initiative, a design competition for Limerick students, at City Hall this Wednesday with Irish women’s rugby captain, Joy Neville pulling on the jacket for the cause.

Going for Gold launched its latest initiative, a design competition for Limerick students, at City Hall this Wednesday with Irish women’s rugby captain, Joy Neville pulling on the jacket for the cause.

Ms Neville, adding a touch of star quality, donned a jacket adorned with a glittering selection of lapel pins to promote the pin designing competition said: “It’s a good event to promote Limerick city and its name. We’re looking to develop a new pin that will represent the pride of Limerick city.”

The Mayor of Limerick, Cllr Gerry McLoughlin also present, said of the wider Going for Gold campaign: “It’s very important, especially bringing the schools on board. That’s the most important thing starting young. Let’s face it these communities will shape these children.

“It’s vital that our children are proud of where they live and seeing their community being clean can be the starting point for that.

“We have to make them feel that they have something positive to contribute and to link it to the parents is vital. Things can happen in schools and if parents are not aware of them they can just (fade away). There is a lot of things happening right now in Limerick but I think this (campaign) is one of the most important.”

“The Going for Gold initiative last year was a fantastic success,” added the mayor of the campaign to get local communities, businesses and villages throughout Limerick to strive for “a brighter, better, cleaner Limerick”.

The scheme was backed by a €50,000 prize fund donated by the JP McManus Charitable Foundation. The €50,000 fund remains unchanged for this year and details of the categories will be announced at a later date. “We are so grateful to JP, this is so important for us, of course all his charitable works are important but this means a lot to us in Limerick.”

“People like Helen O’Donnell who really bought into it and all the volunteers are the ones that made it what it was.” The mayor said Ms O’Donnell’s Limerick Person of the Year 2012 award was “well deserved”.

This latest prize is part of the larger Going for Gold campaign and encourages students of all ages to design lapel pin that inspires pride in Limerick amongst its wearers.

The competition, with a prize fund of €7,500, is open to primary, secondary and third level students. The winning design will be produced into a gold plated lapel pin that will be used to highlight the Going for Gold campaign and to promote Limerick in general.