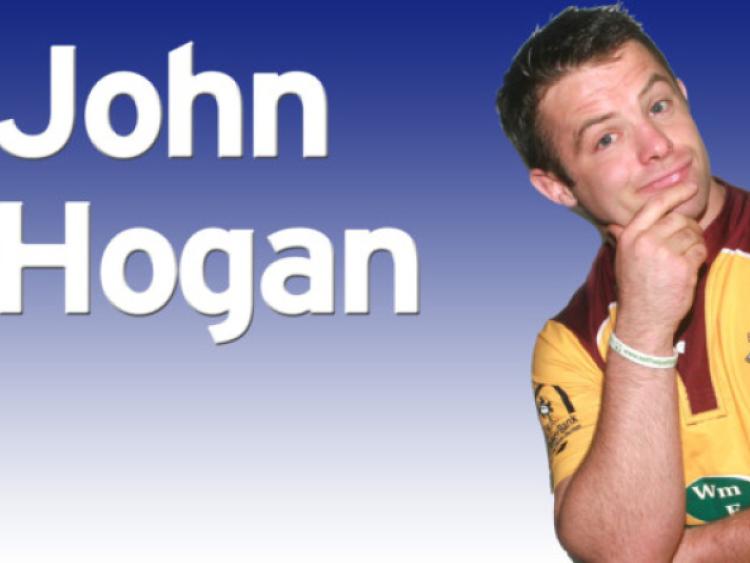 John Hogan was given the unflattering nickname ‘Scutch’ when he was playing U-20 with Bruff and it has stuck ever since. Even the toddlers of the club are in on the joke.

John Hogan was given the unflattering nickname ‘Scutch’ when he was playing U-20 with Bruff and it has stuck ever since. Even the toddlers of the club are in on the joke.

It’s been a number of years since I have spoken with Jack Cott, a former winger with Bruff. Jack and I were close when we attended NUI Galway in the mid-noughties, and played on a Bruff U-20 team that chewed up and spat out opposition for fun every weekend. Sadly, we fell out of contact after college, as girlfriends, the grindstone and geography became an obstacle to regular interaction.

It’s been several years since Jack scampered around a pitch in Kilballyowen but there is a regular reminder of him in a nickname that he gifted me almost a decade ago. It has proven more difficult to remove than a face tattoo and is equally as likely to inspire respect.

If you don’t believe me, try carrying out this little experiment next time you’re out Bruff direction. Ask a member of the rugby club who John Hogan is, and they may not know to whom you are referring. Ask if they know ‘Scutch’ and the answer will almost certainly be in the positive.

In fact, there are probably people reading this column every week, who reckon that John Hogan character from the Leader looks fierce similar to Scutch, who plays hooker for Bruff.

What proved most irksome about my unwanted nickname is that it has no raison d’etre, other than to provoke my ire. It came about when Jack collected me for training one evening in Corrib Village and informed me that I would be known as Scutch from now on. Upon seeing my distaste for the name, Jack became certain that I should, from that day forward, be known to the masses as Scutch. He devoted much of his remaining time with the club to cementing the nickname in the collective Bruff consciousness.

Of course, in the years since, I’ve made my peace with the moniker. I suppose being known as something is better than not being known at all, even if that “something” is bloody Scutch.

There was something of a ‘David versus Goliath’ feeling to this weekend’s fixture against league leaders Ballynahinch. Given the number of players we have lost in the last year, it might even have been more accurate to say that it had the feel of Goliath taking on David the day after the latter had had his appendix removed.

It’s in our nature, though, to tackle every challenge head on, regardless of what body part has recently been removed, and ‘Hinch would be no different. Our resilience was in evidence in training this evening, as we discussed our eagerness to have a tilt at the Northern Goliath.

Despite my earlier stated hostility towards Scutch, I’m always delighted to hear the name when it’s announced in the starting fifteen, as was the case this evening. In such moments, you could refer to me as ‘Sir Short-Arse MacImpotence’ and it wouldn’t even slightly detract from my high spirits.

The start of today’s game had a horrible feel of déjà vu about it, as ‘Hinch got in for a brace of early scores, just had been the case in our last two games. However, unlike our previous two fixtures, we didn’t subsequently stage a valiant comeback and secure a vital losing bonus point. Ballinahinch lived up to the Goliath reputation and gave us our worst hiding of the year. They were undoubtedly the best team we have played and I’m certain they will claim a few noteworthy scalps next season in Division 1A.

It’s hard to convey how low you feel, having been on the receiving end of such a dominant performance. That pain particularly smarts when you consider the remarkable supporters we have, many of whom travel the length of the country to see us play, despite this season’s disappointing results. Solace can come from the most unlikely of places however.

While having our post-match dinner, Cathal O’Regan and I were joined at the table by two-year-old Callum Cahill, son of Eoin Cahill and the newest member of a family that has given more to Bruff Rugby Club than I could possibly relate here.

“Can you say ‘Hello Johnny’?” Cathal asked Callum, in an attempt to distract us from the gloominess of the heavy defeat.

Callum smiled back at Cathal but unfortunately didn’t seem quite up to the task of being able to greet me by name. Cathal hadn’t given up though and, with a grin, asked Callum; “Can you say ‘Hello Scutchy’?”

As if he had been practising for weeks beforehand, Callum turned to me and with perfect clarity said “Hello Scutchy”, much to the delight of everyone within earshot.

Despite the nickname being a source of irritation in the past, hearing the next generation of Bruff’s finest already hailing me as Scutch certainly bought some much-needed cheer on Saturday evening.

>>> John also does a fortnightly podcast called Hoge ‘n’ Smith that can be downloaded on iTunes or from www.hogensmith.com. He can also be followed on Twitter under the handle @thehogespot