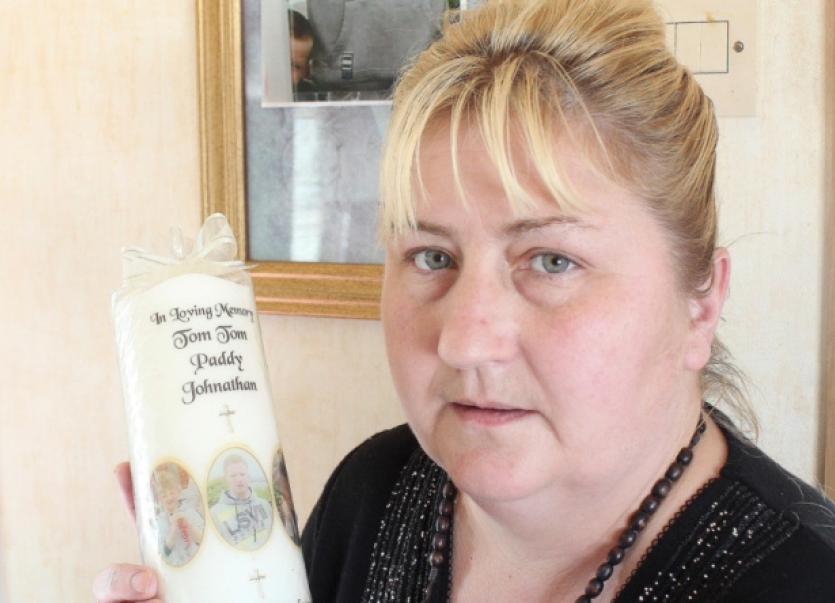 THE mother of a young man who stabbed his twin brothers to death before taking his own life has made an emotional plea for changes in mental health services to be implemented.

THE mother of a young man who stabbed his twin brothers to death before taking his own life has made an emotional plea for changes in mental health services to be implemented.

Helen O’Driscoll, 44, who lost three sons in a murder-suicide in Charleville last September, says that parents should be made aware of a family member’s mental health issues if they are living under their roof, no matter what age they are.

“I can’t understand how they can’t tell the fathers and mothers of children who have illnesses, no matter what age they are, that there is something wrong with them and yet they can stand up in a public inquest and let the whole world know what they have. It’s beyond me,” Helen told the Limerick Leader this week.

“I do think from the bottom of my heart that any child with illness no matter what age they are – 18, 21, 25, once they are in the same house as their siblings and their parents, then their parents should be told. They should be made aware of the condition – everything because if some doctor had to sit me down and say to me ‘Jon is on this, that and the other and he has three mental problems’, I would have looked at my son in a different way.”

An inquest into the deaths of her sons last month heard harrowing details about how nine-year-old twins, Patrick and Thomas — known as Paddy and Tom Tom — and their older brother Jonathan, 21, lost their lives.

The bodies of the twins were found in their home at Deerpark on the Limerick road near Charleville on September 4, 2014.

Jonathan’s body was found several hours later in woodland alongside the River Awbeg in Buttevant, about 15km away. He had taken his own life. “At the end of the day, Jon was 21 and I know they have this thing - confidentiality, but still, at the end of the day Jon was in my yard, under my roof where I had four other small children and my husband and myself and I think that when they knew how sick Jon was that they should have told us. We didn’t see him all summer. We saw him alright in July. He was here minding the yard but we were away - we go away every summer.”

Helen says she and her husband Thomas didn’t know the extent of their son’s illness. He had been diagnosed with early onset schizophrenia and psychosis, and had stopped taking his medication before the tragedy.

He had bought a knife in a local co-op, and had researched stabbings and a method of suicide on the internet, the inquest heard.

Helen says there was no indication that her son would carry out such a crime. “He was on medication. He was on some load of medication. They took a box of medication out of there and I tell the truth it’s the worst I had seen in my life. There were tablets in there he shouldn’t even have been taking. He was too young to be taking a lot of the medication.”

Speaking to the Leader from her home for an extended feature which can be read on the Leader 2 section of this paper, Helen thanked the local communities in Charleville and her native Kilmallock and her family for their support. She paid tribute to Fr Tom Naughton who she said “was absolutely fantastic” and the gardai. “They were outstanding at the time. There was one lady, a woman guard and we’d like her to know that we are still praying for her and hope everything will go alright for her. I don’t know – it’s different for a man to walk in there but for a woman or a mother to walk in and see it - it had to be hard for her,” she commented.