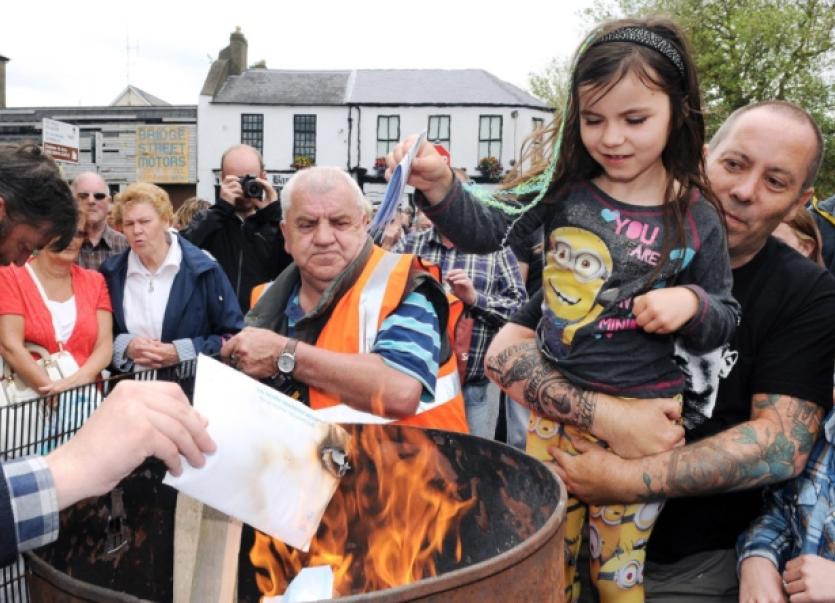 HOUSEHOLDERS across Limerick are being urged not to pay their water bills until at least after next year’s General Election.

HOUSEHOLDERS across Limerick are being urged not to pay their water bills until at least after next year’s General Election.

Addressing a crowd of more than 200 people at a ‘bills bonfire’ at the weekend, Anti Austerity Alliance councillor, Cian Prendiville, said those who do not pay will not be  penalised between now and the election.

During Saturday’s event, a caricature of Denis ‘The Menace’ O’Brien was tried and convicted of “crimes against the working classes” while hundreds of people from across the city burned their Irish Water bills in a bonfire.

“I have received a letter in the post but I’ll be burning it. To me, it is just a money racket and if we pay this there will be something else in a couple of years so it’s time to make a stand now,” said Pat O’Shaughnessy from Old Cork Road.

Terrence Brazil from Garryowen is adamant he won’t be paying for water.

“I’m here to burn it (my bill) because we have already paid for Irish Water and I’m not prepared to pay for bankers to be bailed out by using our money. I feel water is a human right first and foremost and I don’t believe that ordinary working class people and unemployed people should be expected to pay for water because we already pay and I’m completely against it,” said Terrence who is a lone parent.

“We have enough taxes already and if people just go along and pay this - before they know it there will be another one for something else and it will continue,” said Lilly who added that she believes a lot of older people are frightened and are being intimidated into paying through the issuing of threatening letters by Irish Water.