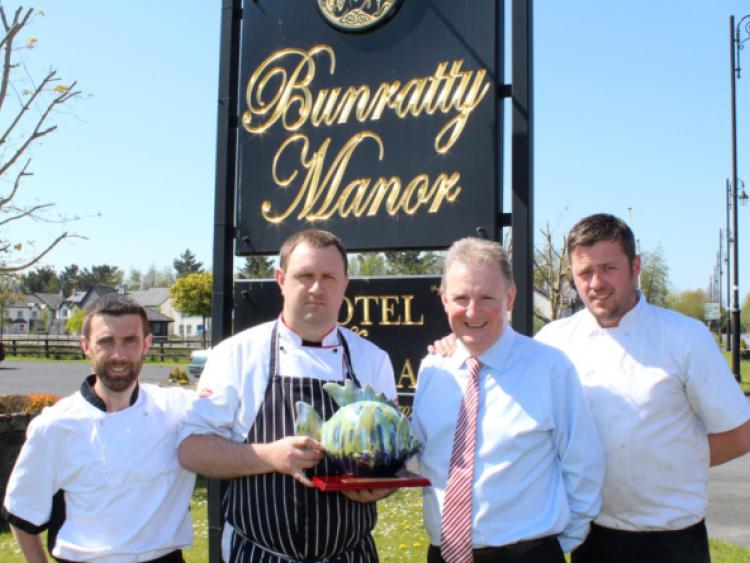 LIMERICK chef Pat O’Neill is heading to the United States and the UK to represent Ireland after his mouth-watering chowder was voted the best in the country.

LIMERICK chef Pat O’Neill is heading to the United States and the UK to represent Ireland after his mouth-watering chowder was voted the best in the country.

Over 1,000 people flocked to the hotel for the event as chefs from all over Ireland cooked up steaming pots of delicious chowder and served tasting portions to ticket holders, who were also the judges of the event.

Apart from the honour associated with the win the prize consists of a trip to Newport Rhode Island to compete in The World Chowder Cook Off and also a trip to London to participate in The British Street Food Fest.

The Bunratty Manor is run by Noel Wallace from Glin, ably assisted by his wife Fiona, daughter Maureen and son David, a well known rugby player with Shannon RFC. In 2011 they also won the All Ireland chowder title and were voted third in the world at the event held in Rhode Island, under the leadership of chef Paddy Collins.

This year they are hoping that Pat O’Neill’s creamy smoked haddock-based chowder, garnished with smoked salmon, will win the world title.

“It was thoroughly deserved as he is a totally dedicated professional who is very proud of his chowder and got immense pleasure from the victory/ He is eagerly looking forward to representing Ireland in both London and Rhode Island,” said Noel, who added: “We have a small team of very dedicated staff without whom The Manor would not be what it is and great credit is due to all of them especially chowder chef Patrick O’Neill who worked tirelessly to produce the perfect chowder. We pride ourselves on friendly hospitality and good food”

Members of the public had only one vote to cast for the best of 32 chowders.

For the €10 entry fee visitors receive a voting card that allowed them to sample all chowders from the individual stalls before casting their vote, with Pat topping the poll.