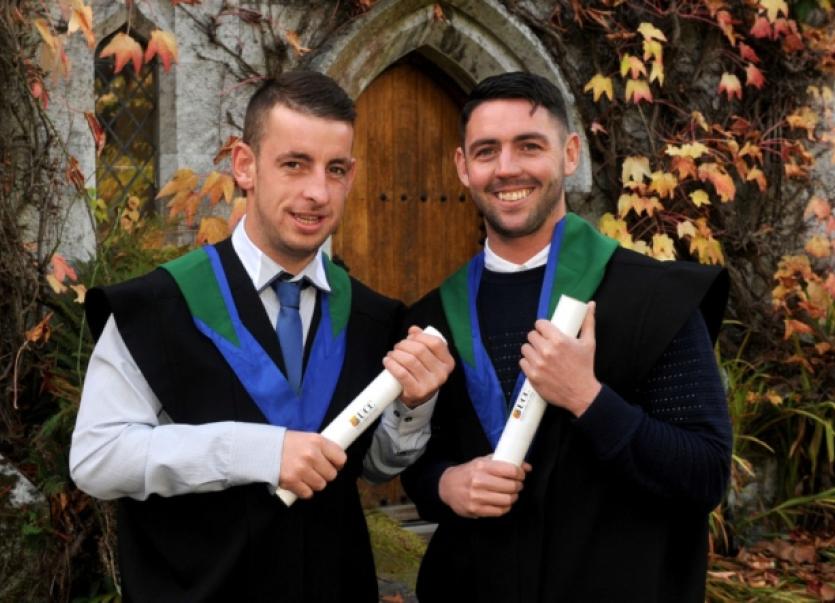 TWO young men from Ballinacurra Weston have found their way into the world of work through a unique employment scheme designed and run by West End Youth Centre.

TWO young men from Ballinacurra Weston have found their way into the world of work through a unique employment scheme designed and run by West End Youth Centre.

Jamie Kelly and Evan O’Grady have just graduated with diplomas in youth and community from UCC having completed the three-year Apprentice programme and both are now in full-time jobs.

Jamie and Evan were the first participants in the scheme, which saw them work with youngsters in Weston as they earned their qualifications.

West End Youth Centre manager William Priestly is now urging other groups around the country to look at the example of what Jamie and Evan have achieved in Weston - one of the country’s most deprived communities - and see if their success can be replicated elsewhere.

The idea of “empowerment” was “one of the most enigmatic words in the community development lexicon”, said Mr Priestly.

“What it rarely entails, however, is salaried positions. These, more often than not, are reserved for third level graduates. There are many local people in marginalised communities around the country who, with the right support, would serve as the perfect social worker, psychologist or nurse, as they know the challenges, dynamics and nuances on the ground far better than any social theorist.

“Many children growing up in disadvantaged areas never meet a single employee of a state service who can relate to them on a personal level. Community empowerment for many communities has long meant tokenism and voluntary roles that, if not dramatically embraced, are seen as further evidence that more intervention by trained, salaried professionals is required,” Mr Priestly said.

“Similarly, there were few opportunities for the formal advancement of volunteers in Ballinacurra Weston and little reason to imagine this situation would change. As a result, the West End Youth Centre designed a three-year programme in 2011 that would offer two promising young people all the training and qualifications necessary to become professional youth workers.

And so when Jamie and Evan walked in the door of their local youth centre three years ago, they were the perfect candidates as two motivated young men who grew up in the locality and who the local youth could relate to.

Over €75,000 was raised to support the programme by local partners including Limerick Regeneration, the JP McManus Foundation, Reed Elsevier Publishing and the ESB.