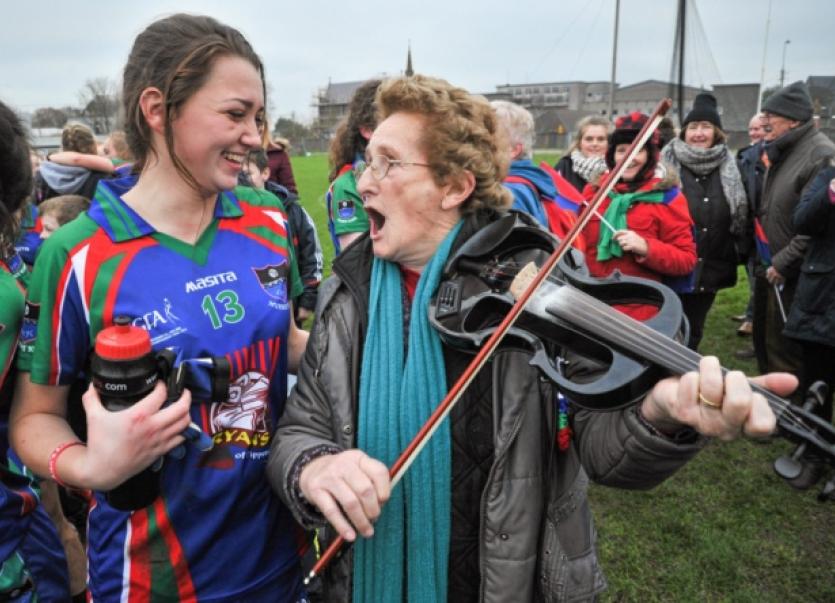 SHE may not have been part of the winning squad but pensioner Eileen Leonard set the tone for Murroe-Boher’s All-Ireland celebrations on a pitch in Ballinasloe by playing a rousing rendition of We’re on the One Road on her electric fiddle.

SHE may not have been part of the winning squad but pensioner Eileen Leonard set the tone for Murroe-Boher’s All-Ireland celebrations on a pitch in Ballinasloe by playing a rousing rendition of We’re on the One Road on her electric fiddle.

Immediately after the final whistle, the 77-year-old joined the jubilant ladies football team - who were crowned All-Ireland junior club champions on Saturday - for an impromptu celebratory seisiún.

“I played Sean Sabhat from Garryowen, and We’re On the One Road. I’ve been playing the fiddle since I was seven or eight years old,” said Eileen who brings the fiddle everywhere with her in the back of the car.

As it turns out, she doesn’t teach the fiddle - she still gives driving lessons.

Eileen’s granddaughter Lisa Leonard was one of the stars of the game and the 16-year-old showed her musical flair after the full-time whistle when she too played a tune on the snazzy black instrument.

“I got a sudden thought into my head that I wanted one,” recalled Eileen of purchasing the electric fiddle.

“I bought an electric one because I had a few pounds. We have a small amplifier and it’s great.”

“The girls love it. We are all part of Regan’s Army - named after the manager Noel Regan.”

Speaking to the Leader this Tuesday, Noel said the team and management are “coming down to earth a bit now” after their comprehensive 3-11 to 1-1 win over Roscommon champions St Ciaran’s in Ballinasloe.

It’s a real family affair for the Regans - Noel’s wife Helen is a selector while two of his daughters - Aisling, 17, and Grainne, 16, are on the team.

Selector Donal Ryan also has a daughter on the team - Shauna, 16, who plays mid-field.

Interestingly, there are three sets of sisters on the team - twins Aoife and Saoirse Barry, Roisin and Aoife O’Malley, and the Regans. The average age of the squad is 19.

“We played our first match last February and the All-Ireland final was our 18th match at adult level and we won all 18 of them.

“We train an average of twice a week,” Noel explained. “Some of the under 16s would have played nearly 30 matches this year - it’s substantial. An interesting fact is that they haven’t been beaten in any competition this year at U16, minor or adult level - they have won every match. The chances are we’ll probably go years without a year like this so you have to make the most of them.”

The girls returned home to a hero’s welcome on Saturday night - one which will live long in the memory says Noel.

“We have got fantastic support from the community. The homecoming on Saturday evening was superb. We received a garda escort down the street and there was a beautiful fireworks display. What the team has achieved this year has been phenomenal - I don’t know will it ever be done again by anyone. There is a great sense that this team is pretty unique.”