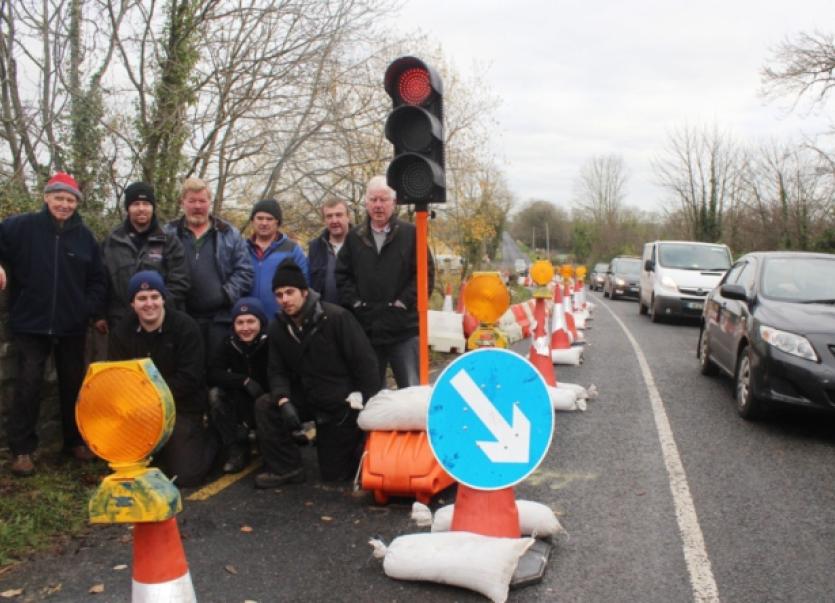 RESIDENTS living near a busy County Limerick bridge have been left infuriated by the news that a single-lane, traffic light system will remain in place for motorists “for some time” while the local authority tries to find money to repair it.

RESIDENTS living near a busy County Limerick bridge have been left infuriated by the news that a single-lane, traffic light system will remain in place for motorists “for some time” while the local authority tries to find money to repair it.

Commuters travelling on the main road between Kilmallock and Charleville are experiencing delays at the stop-and-go system which the local authority say has been put in place due to a health and safety hazard at the bridge.

Due to a number of collisions over the years, a large section of Garrienderk Bridge has been knocked down.

“We’ve been told that nothing is going to happen for the next 12 to 18 months,” said local resident Joe Power.

“It looks absolutely terrible. It’s an eyesore and it’s also very dangerous. As one of the neighbours pointed out to me this morning, with all the extra traffic on the other side of the road, is the road capable of taking it? There was a truck last week and he couldn’t take off at the lights at the top of the bridge.”

According to Mr Power, it was indicated 12 months ago that work was to commence on the building of the wall of the bridge.

“Earlier this year they came on and cleared away all the inside of the bridge and they left it,” he said.

“The whole lot was shelved. They came on two weeks ago and told us that this is a safety measure they are after coming up with. There is history to this bridge – it was the last place Michael Collins was photographed,” he added.

There are fears locally that an accident will occur at the bridge.

“When I’m coming down, people think I am passing out the traffic lights but I’m actually indicating to go into my own place. There will be an accident there,” said Joe who lives on the Kilmallock side of the bridge.

“For the last couple of years, we have been trying to tidy up Garrienderk and we have a nice tidy job made of it. We have been left down now. There are more than us annoyed by it – if you asked anyone going to the mart in Kilmallock, they will say the same.”

Mr Power posed the question as to how much it is going to cost to keep the single-lane traffic lights system in place for the foreseeable future. “An employee supposedly has to come twice a day to check the batteries in the lights – what is that costing?” he asked.

“The bridge had been hit on numerous occasions over the last 20 years and there is a steep incline there, so, for health and safety purposes, we have put one single lane of traffic there with traffic lights in place.”

“Tenders were back last week so a consultant has to be appointed. He has to come up with a design within the next four to five weeks and whatever design he comes up with - funding has to be found from somewhere,” he explained.

“We won’t know exactly what needs to be done until we get the consultant’s report. First of all, it’s down to what the consultant is going to come up with in terms of the preferred solution and then it’s a question of getting funding for it and seeing what’s involved.”

Mr O’Connor said there is an individual who is monitoring the lights “just to make sure that everything is OK”.

“Some of the flashing lights on the cones had already been vandalised,” he noted.