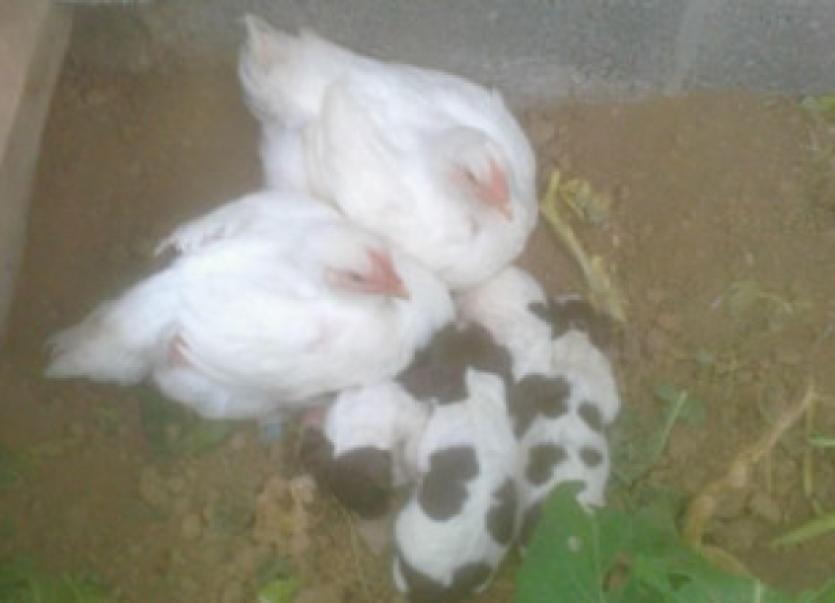 SURELY it’s time for these hen pecked puppies, pictured, to fly the coop.

SURELY it’s time for these hen pecked puppies, pictured, to fly the coop.

The remarkable photograph of two chickens nesting on top of four newborn puppies was sent to the Leader by John Franklin from Ballyneety, Pallasgreen.

Two feather-brained birds brought the phrase “mother hens” to new extremes when they began to take over parenting duties.

John says their Springer Spaniel called Sally had four pups around the same time that they bought 30 broilers.

“After they were born whenever Sally used to leave them for a little while two hens would come in and lie down with the pups.

“It was almost like they were babysitting them - taking over from Sally to give her a break. The pups, they were only a few days old at the stage, would snuggle into the broilers.

“We couldn’t believe our eyes. I’ve never seen anything like it before,” said John.

The pups were born in a greenhouse. So whenever Sally would wander away the broilers hatched a plan to go in and nest on the pups.

John says this went on for about a fortnight and Sally certainly didn’t mind being given a hand with her offspring.

He says his wife Margaret and two daughters and son, Rachel, Katie and Jack “Donie” got a great kick out of the unusual sight and telling their friends about it.

“It was a great novelty for the children,” said John.

The photograph above was actually taken by his brother Joe while John and Jack “Donie - two of Limerick hurling’s biggest fans - were at a game.

“John even got a car painted green and white and signed by all the players ahead of the All-Ireland semi-final.

“We were heading off to a match but there was a stray dog in the locality so I asked Joe to keep an eye on the pups and make sure everything was alright. Joe came in, saw the hens on top of the pups and took the photo.

“It certainly has done the rounds,” said John.

One night while he was socialising he showed it to a friend in the pub.

“He said you should send that on to the Leader. He couldn’t believe it. He said if I hadn’t shown him the photo there was no way he would have believed it,” said John.

Another time he was telling the story and a person thought he was joking.

But when he showed the photographic evidence on his phone the chickens had come home to roost for the sceptic.