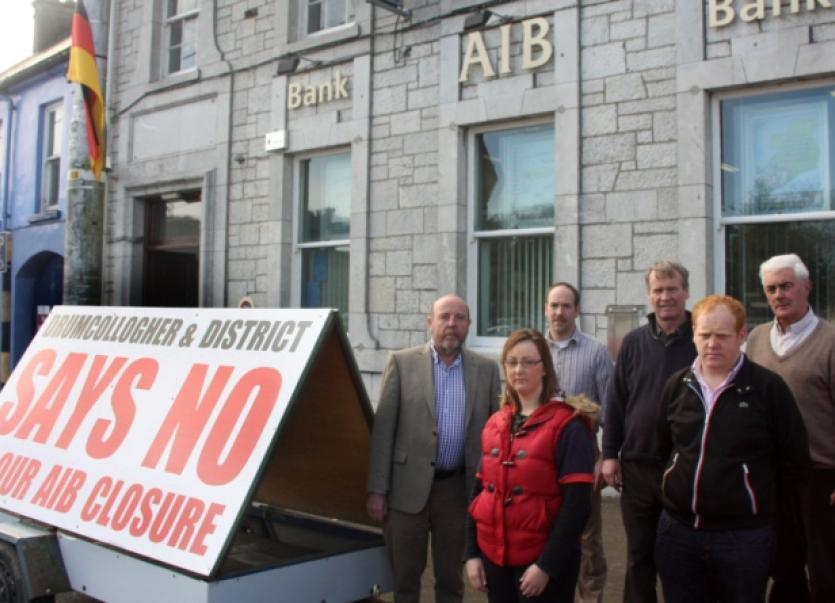 ONE YEAR on since AIB controversially announced that it was to close eight of its branches in Limerick city and county, the decision still leaves a bitter taste in the affected communities.

ONE YEAR on since AIB controversially announced that it was to close eight of its branches in Limerick city and county, the decision still leaves a bitter taste in the affected communities.

Last summer’s confirmation by the bank that is was to close its branches in Dromcollogher, Doon, Glin, William Street, Corbally, Croom, Foynes and Hospital left locals stunned and sparked a huge public outcry.

Over the twelve months that followed the branches were shut one by one, leaving a trail of frustrated, inconvenienced customers behind them.

Petitions, protest marches and public meetings all failed to reverse a decision which communities – especially in rural areas – are still struggling to come to terms with.

Noel Morrissey, a publican in Dromcollogher, said that AIB has lost all the goodwill it once held in the parish: “In a simple word, it’s a joke. All they want these days is your money, not to have to look at your face. You’re heading into Newcastle West these days, and they don’t even want to talk to you. In fairness to the staff, that’s not what they want to do, but it’s what they’re being told. It’s a major loss to the town.

“It doesn’t matter what we say anymore, you’re just wasting your breath and upsetting yourself talking of it.”

Dromcollogher and Doon were the first Limerick branches to close, locking their doors for the last time in October 2012. Tom Hayes, PRO of Doon Community Council said that locals are trying to make the best of the situation they have been left with, and have moved AIB’s mobile banking service to a suitable location. “There were big queues in Christmas week and it was lashing rain. Now they can go and sit down in the hall and wait in comfort”.

Cllr Patrick C Fitzgerald said that the closure of the bank branch in his native Croom has, as expected, had a wider negative impact. “A bank or an institution like that brings people into a major commercial town like Croom. It attracts footfall.

“There is a tie-in between a bank and their customers and they now have to go to Rathkeale, Charleville, Kilmallock or into the city. When you are trying to attract foreign business, banking is top of their list”.

“If I ring my local branch, which is Abbeyfeale now, I get through to a centralised call centre. Not everybody can switch to internet banking in the morning.

“It was the decision made by faceless people that got us into this trouble. And if you go looking for any bit of credit, you’re at the whim of people who don’t know you or your track record.

“The mobile banking might be alright in this seasonable weather, but in the middle of winter it’s not going to provide much service. And if the clerk decides to just shut up shop, you’re told to head along to the next town”.