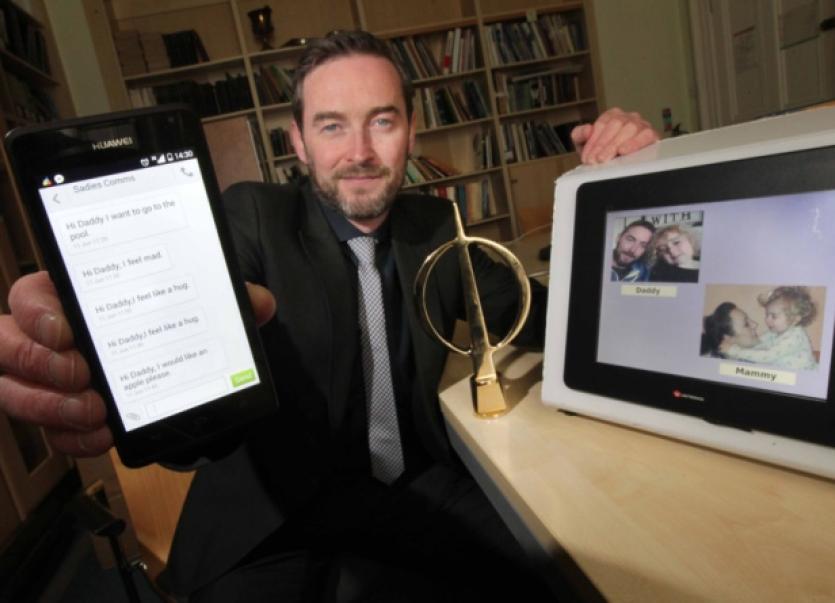 A LIMERICK student who has developed a system to help children with autism communicate is in line for a major national award.

A LIMERICK student who has developed a system to help children with autism communicate is in line for a major national award.

Robert Laffan, 38, from Old Cork Road, developed Tippy Talk, a communication system that has been designed for children with autism to help them communicate their desires, feelings and needs to parents through the transfer of pictures to text messages.

It will be recognised in the Innovative Student Engineer of the Year Award category sponsored by Siemens.

Robert’s new touchscreen device has already opened new channels of communication with his autistic daughter, five-year-old Sadie, and in the process won him a number of awards, including Limerick Person of the Month.

Robert, who has just completed a course in automation and control engineering at Limerick Institute of Technology, is in talks with Enterprise Ireland to develop and market Tippy Talk.

The device may revolutionise one-to-one contact with people who have non-verbal disabilities.

His intention is that the system which currently operates through a separate piece of hardware with the messages being sent via text messages to phones, will be developed into app form so that it can be downloaded to Android tablets. It is not just limited to autism, it can be adapted to any non-verbal disability; stroke, Alzheimer’s, dementia and Parkinson’s.

He is hoping that his invention will take off internationally.

“It is a very simple idea – and came about from being in the right place at the right time. That’s all it was.”

The University of Limerick has also been shortlisted in the awards for its Bachelor of Engineering in Electronic and Computer Engineering course in the Engineering Education – Best in Class 2015 Award category sponsored by CRH.

The Limerick Coca-Cola Zero Bike Share Scheme by Arup has also been shortlisted in the Engineering Project of the Year Award category sponsored by Transport Infrastructure Ireland.

Winners of the various categories of the Engineers Ireland Excellence Awards 2015 will be announced at the award ceremony on November 6 in the InterContinental Hotel, Dublin.

“The Engineers Ireland Excellence Awards are going from strength to strength, with this year marked by more entries than any year previously. In particular the number of entries for Engineering Project of the Year is the highest to date which is great to see,” said Caroline Spillane, Engineers Ireland director general.

“The quality of Limerick entries this year shows the engineering ingenuity and creativity that is a feature of the region. Overall we are seeing the high calibre of entries reflecting the evolving nature of contemporary engineering, with projects this year.”