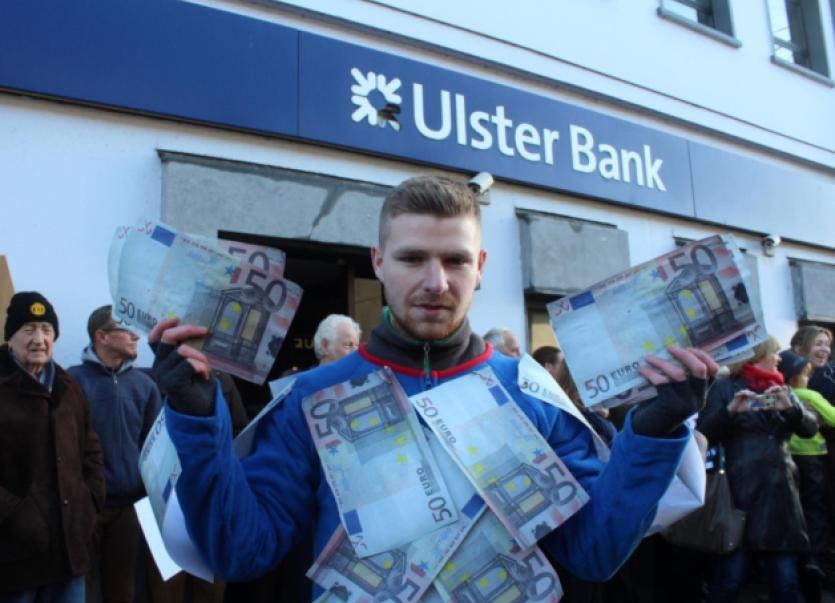 A crowd of close to 200 people turned up to a public meeting in Croom this Friday morning to show their opposition to the proposed closure of the town’s Ulster Bank branch.

A crowd of close to 200 people turned up to a public meeting in Croom this Friday morning to show their opposition to the proposed closure of the town’s Ulster Bank branch.

And the organisers say they will be bringing their protest to the bank’s branch in Dooradoyle next Friday if senior management do not respond adequately to their calls for banking services to be retained in Croom.

Local businessman Padraig Broderick told the meeting that there were over 5,000 accounts held in the branch and that the ATM turned over €7m last year.

“There is no alternative for an ATM that dispenses €7m a year,” he said.

“As far as we are concerned we are fighting for this bank to stay open and that ATM is not coming out of the wall,” Mr Broderick added.

Following the meeting a petition with over 4,000 signatures was handed in to management at the bank. The meeting was also addressed by a number of local politicians and a coffin was placed symbolically against the wall of the bank.

According to Fianna Fail councillor Richard O’Donoghue, the closure of the bank was reflective of an ongoing neglect of towns and villages in rural Ireland.

“Croom needs a bank. It is the only bank in Croom to service our businesses, our residents and the surrounding areas,” he said.

The Croom branch is one of 14 nationwide which have been earmarked for closure by Ulster Bank. But local man Seamus Sheahan pointed out that only three of these towns - of which Croom was one - would be left without any banking services if the closure goes ahead.