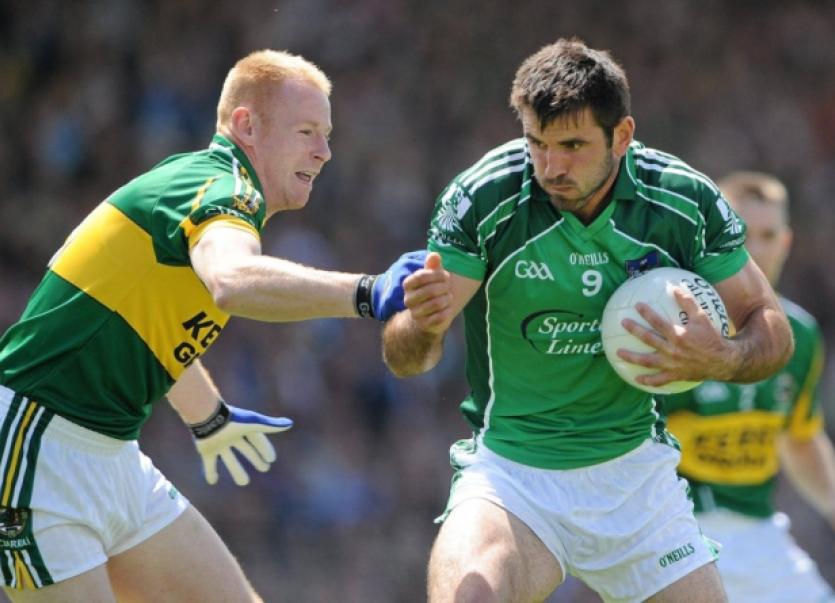 The Croom giant decided to call time on his intercounty career last week.

It came as no surprise to me that he took such action but none the less it’s now very final and we will never see the great John Galvin in the green and white of Limerick again. He will be remembered both inside and outside Limerick for the many outstanding games he played for the county.

He was in so many ways the leader and motivator of the teams he played on and with little fuss he let his actions on the field do the talking for him. On many occasions Galvin fetched the ball from the clouds and it was matched by the roar of the crowd who love to see clean catching. This of course is a special art in the game of football and few could match Galvin when in full flight.

The towering frame of six foot four inches made life very difficult for football’s greatest. I had calls this week from players and managers all around the country and one by one they spoke of the honesty of Galvin and his loyalty to Limerick football. He was indeed one of if not the greatest footballers Limerick produced.

He had many great and difficult days with Limerick but for me he set a standard of what it means to represent your county and others could learn from that.

John Galvin is held in the highest regard amongst all Limerick GAA people. Off the field he kept to himself and never courted the media but on the field he was the lord and master and his leadership made a telling impact in Limerick football for 15 years. It was a shame that he and his team mates never tasted success in Munster during a period in which they were serious contenders.

He played in four Munster finals, three against Kerry and one against Cork. He was captain on the Limerick U-21 team that won a historic Munster title in 2000. I will never forget that night in Dungarvan. Great football men cried at the sight of Galvin holding aloft the Cup. It was a special evening. They beat a fancied Westmeath team managed by Luke Dempsey in the semi-final and lost a great final to Tyrone in Mullingar. A Tyrone team managed by Mickey Harte and populated by many players who would go on to win three senior All Irelands - in 2003, 2005 and 2008.

The sight of a Kerry jersey seamed to bring the best from John Galvin, he and Dara O’Se had some mighty battles. They pulled and pucked each other on the field in the pursuit of the ball of leather but each had such admiration for each other. The Galvins came from North Kerry and the Kerry boys had real time for the man that crossed the border. They knew and told me many times of the steel within John Galvin.

They knew he was a leader and had the ability to take the game to them. Had John Galvin wanted to play for Kerry it could have easily happened and today he would have a fist full of All Ireland titles. Instead he stayed loyal to Limerick and on every occasion he pulled on the Limerick jersey he made sure to test himself and also the muscle and fibre of the men he marked.

For ten years Limerick footballers won real respect in the way they played the game. Yes they lacked the panache of the stronger counties but they used the tools they had to give so many of them the fright of their lives.

He was named on the 2010 GPA team at midfield and it will forever remain a great shame that he was overlooked on the All Star teams despite being nominated on three occasions. Those who selected such teams did Galvin and football a great disservice by overlooking him.

It would have been easy for John Galvin to have walked away when serious knee injury came his way on two occasions. At that stage he had given everything to Limerick football. Another man might have taken the soft option and walked away but not Galvin.

The game meant so much to him and deep down he harboured the view that maybe just maybe that elusive title in Munster might come his way. Men are sometimes judged by medals but such symbols would in no way tell the real story of John Galvin.

He was a very special player that was so well respected by his teammates and all who supported Limerick GAA He was the go-to man when the team needed a lift. He was the player who with one word controlled the dressing room. Young lads who joined the panel over the years will tell you how Galvin let them know what was expected of them and how every opportunity had to be taken to make themselves better.

So much was expected of Limerick hurling as the new millennium turned the corner but sadly what followed was years of frustration at senior level. It will be remembered as a time of real underachievement. It was the footballers who led the way. Liam Kearns set the foundation, he benefited from the work of Pat O’Shea at minor level and thus began a glorious ten years for Limerick football.

At least one of those Munster titles should have been won but alas it was not to be. I will never forget Galvin at his best, climbing high and wielding the elbow to make space on the way down, he manoeuvred his way through the centre to off load or score. For me he was one of the greatest men I have seen to wear the Limerick jersey.

Just like he played John Galvin slips away without too much fuss, he does so having given so much to Limerick. It was an honour and privilege to witness his career. The big fellow is gone but not forgotten.