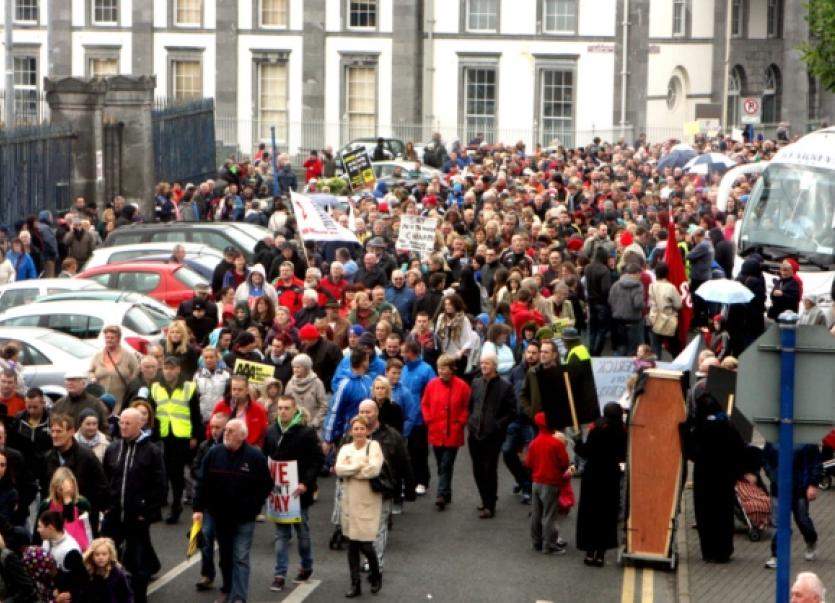 IN years to come, if anyone asks me where I was during the great water charge revolution, I’m afraid I’m going to have to say that I was under the bed. I’m hardly going to say that I was out having dinner in a local restaurant with an old friend, and that both of us – being off the wine for November – were sipping expensive bottled water, having declined the offer of free tap water.

IN years to come, if anyone asks me where I was during the great water charge revolution, I’m afraid I’m going to have to say that I was under the bed. I’m hardly going to say that I was out having dinner in a local restaurant with an old friend, and that both of us – being off the wine for November – were sipping expensive bottled water, having declined the offer of free tap water.

The bottom line, however, is that I wasn’t out in 2014, if that’s what they’ll want to know. Of course, if I had known how popular Saturday’s march would prove, I might have joined in. I underestimated the Irish revolutionary spirit by a mile. You see, I’m one of those infuriating people who really want to be in that number when the saints go marching in, but who are never in the right place at the right time, especially when history is being made. What wouldn’t people like me have given to have been in the GPO at Easter 1916, even if we were only there to buy a stamp?

As you probably know by now, I have my own jealously guarded spring well, but of course, I wouldn’t want to pay for public water either if I could help it. I didn’t even want to pay for parking the car all day in Limerick city after nearly 10 years of parking outside the front door of the office for free. I tried to whip up a bit of a revolution, but people weren’t half as bloodyminded then as they are now. Anyway, my thinking is that if the drought-stricken ancient Romans were able to supply water free gratis to its million or so citizens – including enough pure water to service public baths the size of football pitches, and ornamental fountains that would put the spout outside Leinster House to shame – I can’t see why this rain-sodden, bog-pitted island couldn’t do likewise.

The Romans, however, are believed to have funded their still impressive aqueducts out of their even more impressive war booty, and for all the wars that Enda has fought as emperor of the Irish, there really isn’t enough money from any of them to build an aqueduct – although there was the makings of one flowing down my own road after a couple of torrential downpours the other day.

Which brings me to the point of what I want to say about Irish Water! The CEO is a Tipperary man from the banks of the Shannon, and I, being an ardent parochial if nothing else, don’t want to be too disparaging about the organisation. But even I have to admit that it is an unholy mess. They should have left the provision of public water in the safe hands of the county councils who had been handling it for over 100 years and whose only crime was taking a few junkets every year to drought-stricken parts of the globe, looking for clues on how to find water in the unlikely event of the desertification of the Emerald Isle.

Sure enough, county councillors did award themselves the odd bonus at our expense for not performing, but that came from a communal fund and, if you’ll excuse the pun, was well watered down before being used to pay for a county councillor’s trip to California – where I believe they are now asking consumers to pay for a glass of tap water at petrol stations. The public purse is such a vague notion that even the most parsimonious among us haven’t a clue what we each have in it. Only Michael Noonan knows that and sometimes he too seems to be surprised at the size of it. The ordinary Romans probably didn’t know what they had in their war booty either, but they were, by all accounts, very extravagant with their water supply.

As the chanters said on their march on Saturday, water is a human right. We can’t survive without it, although some health experts are now suggesting that we’re washing ourselves too often – a shower every second day should suffice, they claim. “Gross!” said one of my offspring. But supplying water obviously costs money and if they can start charging for a glass of tap water on the parched highways of California, where it was always illegal to charge for water, then obviously there is a price on the tap – or the glass, as the case may be. But despite what some politicians are saying, I don’t think that it is the principle of having to pay for water that is causing such outrage and concern. It’s the price being asked by Irish Water, which is far too high. People simply can’t afford the charge. They should have been charged nothing more than a nominal fee for getting drinkable water on tap. I remember back in the early days of this century when milk prices were plummeting and angry dairy farmers were disparagingly comparing the price of a bottle of water to the price of a bottle of milk, and people were suddenly confronted with the unthinkable. They were paying more for the water. Irish Water should remember this. Irish people do not, and probably never will, regard water as a premium product, and in this damp climate, how we’ll ever be taught to even appreciate it, I don’t know.

I don’t know either, how we could fund Irish Water, with just a nominal charge per household. Apparently we can’t dismantle the company, but maybe we could just let them die of the thirst. Otherwise, I’m afraid, we’re going to need some kind of a war booty!