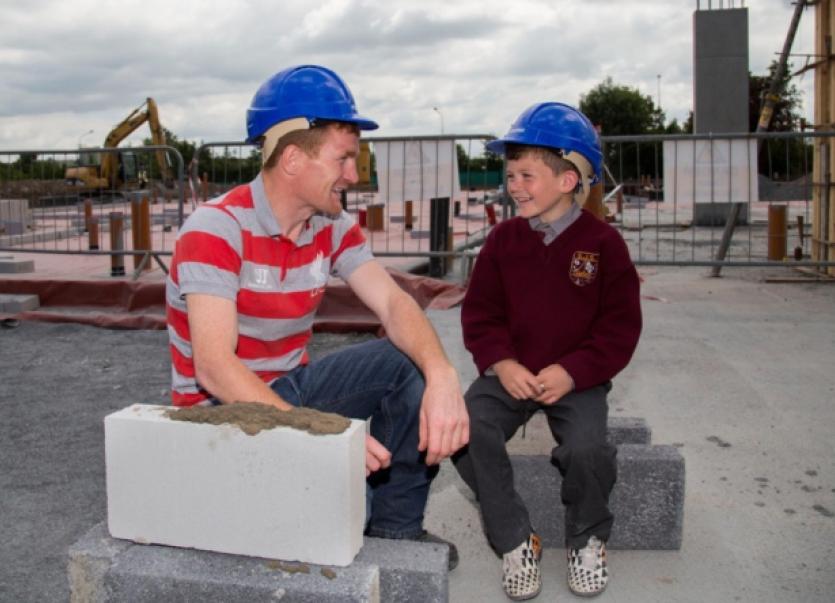 SOUTHILL boxer Willie Casey is pleased as Punch with the plans to bring his two former schools under one roof.

SOUTHILL boxer Willie Casey is pleased as Punch with the plans to bring his two former schools under one roof.

The man known as Big Bang is a past pupil of both Southill Junior School and Galvone NS and now has kids of his own in both schools.

A new model of school is going up next to Galvone NS and should be ready in time for the start of the school year in 2015. The 12-classroom Le Cheile NS will see the amalgamation of the schools and is part of an overall campus that will offer an integrated range of supports and services for local children and their families.

The initiative is led by the Diocese of Limerick and the cornerstone was laid by the Minister for Finance Michael Noonan with the help of schoolchildren including eight-year-old Terry Casey on Monday.

“I have kids in both schools myself and I can see huge benefits in it. The education they receive is great and it’s going to be even better now when both schools come together,” said Terry’s proud dad and former European champion Willie.

Willie was in Galvone NS when it was still known as St Kieran’s and while there might not have been any boxing in the school, he enjoyed the football and the hurling. And he hopes the amalgamation will be an opportunity for children around the Southill area to take up these sports again.

“I have a lad that finished in Galvone last year and is gone on to Clement’s and he started up all the sports there, football and hurling and soccer. It was a little bit new to him but he has settled into it well. If he had been playing for a couple of years in primary it would have benefitted him. So hopefully we can see more sports in the new school.”

New sporting facilities are indeed part of the €5m school development going up in Roxboro. But there is much more than sport that Willie is looking forward to.

“Most important of all is probably the homework club. That will be a huge benefit for everyone. Then there’s the breakfast club and as we all know breakfast is the most important meal of the day.”

Big Bang himself is laying off the bangers for now as he prepares for a fight in Belfast this Friday night against a Polish opponent.

“I’m trying to get back into the swing of things so hopefully it will open some doors again for me because I’ve been a bit inactive for the last while,” said Willie, who hopes to work his way back up to another major title shot.