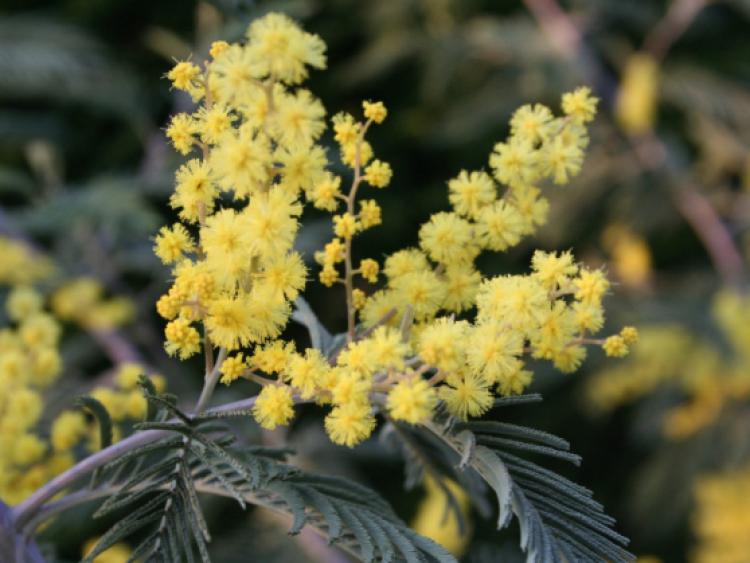 Acacias or wattles as they are called in Australia, are half-hardy trees and shrubs from the southern hemisphere. These plants, are also called mimosas, produced yellow flowers in early spring and are often scented. The flower heads are small and form in clusters along the stem. The leaves are pinnate in shape, which gives a feathery appearance to the plant.

Acacias or wattles as they are called in Australia, are half-hardy trees and shrubs from the southern hemisphere. These plants, are also called mimosas, produced yellow flowers in early spring and are often scented. The flower heads are small and form in clusters along the stem. The leaves are pinnate in shape, which gives a feathery appearance to the plant.

Acacias need a lime-free soil that is well drained and sheltered against cold winds. They need full sun and a south or west wall to protect against frost, they do well in coastal gardens. In recent winters many acacias died during the frost but recovered during the summer. They can be planted in spring.

The branches should be pruned after flowering to encourage more compact growth.

Acacia dealbata is the most commonly grown variety. It is a vigorous evergreen tree whose blue-grey fern like leaves look silvery from a distance. Acacia baileyana ‘Purpurea’ is a plant worth looking for, the tips of the shoots are purple and it looks great even when it is not in flower.

Prune now to get your plants into shape

This is the traditional time of the year to prune trees and shrubs before the sap starts to rise. Many gardeners get into a tizzy when it comes to pruning. Many plants need little or no pruning if you have a large garden where you can allow plants to grow naturally. Unfortunately gardens are getting smaller and we need to prune more to restrict the size of trees and shrubs. Most gardeners will know how to prune roses but are afraid to prune anything else. Timing is vital – if you prune a flowering shrub at the incorrect time you may loose a whole year’s flowers but the shrub will flower the following year. Plants that flower on the current year’s growth can be pruned from autumn to early spring. If a plant flowers on the previous year’s growth it is pruned immediately after flowering.

Maintenance pruning is carried out to remove branches that are dead, diseased or damaged by wind to prevent the disease spreading. This type of pruning can be carried at any time of the year. The damaged branch is cut back to a healthy shoot or bud. When removing large branches use a pruning saw. First cut halfway through the branch from underneath.

Then cut from above to remove the branch – this prevents the branch from breaking off and tearing the bark on the main stem. Variegated trees and shrubs often produce shoots with green foliage. These should be removed as soon as they appear because the green foliage is more vigorous than the variegated foliage and would eventually take over. Plants that are grafted onto rootstock, such as roses and cockscrew hazel, produce suckers that grow straight up. These must be removed when they appear to avoid them taking over and reducing the vigour of the grafted plant.

Early-Flowering shrubs that flower in spring and early summer like forsythia, philadelphus, deutzia, spiraea and chaenomeles are pruned after flowering. Cut each stem that has produced flowers back to two or three buds from the main stem.

Plants such as abutilion, Buddleja davidii, cotinus, fuchsia, indigofera and perovskia produce flowers on stems grown in the current year. These plants are pruned in spring, just as the new growth is starting to show. Cut all last year’s shoots back to two or three buds from the older wood. Do not cut back into the older darker coloured wood because this wood may not produce new shoots. After pruning mulch around the plant with a layer of compost or well rotted manure.

Late flowering clematis that flower from mid-summer on are pruned to the ground in spring and given a mulch of compost. All the other clematis need little or no pruning but they may be tidied up after flowering.

Apple trees and pear trees can be pruned now. Remove any damaged or diseased branches. Remove some branches from the centre of the tree to open up the centre and allow more light in. Do not prune back too hard. Pruning will encourage new flowering shoots that will produce fruit later in the year.

Limerick Flower & Garden Club would like to congratulate Tony Mackessy who recently received an award from Pope Francis for flower arranging at Holy Trinity Church, Adare for the last 40 years.