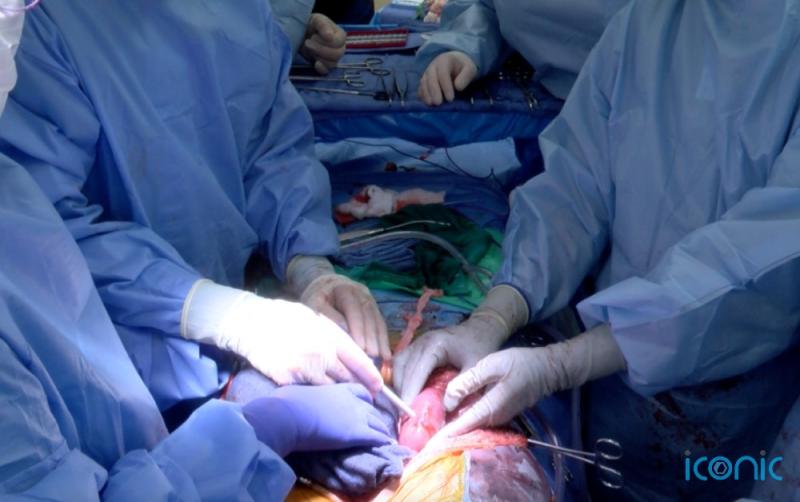 Experts now hope to carry out a clinical trial on living humans with serious kidney problems.

Two kidneys from a genetically modified pig have been transplanted into the body of a brain dead human in a world first.

This achievement has been hailed as a “game-changing moment in the history of medicine”.

The process shows the procedure may be viable in the long term and how such a transplant might work in the real world, researchers say.

Experts now hope to carry out a clinical trial on living humans with serious kidney problems.

The transplanted organs were able to carry out the functions of kidneys, scientists from the University of Alabama (UAB) in the US report.

They successfully filtered blood, produced urine, and were not immediately rejected.

According to the study, the kidneys continued working until 74 hours later.

The transplant recipient was a 57-year-old man called Jim Parsons who was kept alive on a ventilator.

The results demonstrate how this kind of transplantation from one species to another, known as xenotransplantation, could address a global organ shortage, the study’s lead surgeon, Dr Jayme Locke, said.

Dr Locke, director of the Comprehensive Transplant Institute in the UAB’s Department of Surgery, added: “This game-changing moment in the history of medicine represents a paradigm shift and a major milestone in the field of xenotransplantation, which is arguably the best solution to the organ shortage crisis.

“We have bridged critical knowledge gaps and obtained the safety and feasibility data necessary to begin a clinical trial in living humans with end-stage kidney failure disease.”

She added: “The concept of being able to have an organ waiting on the shelf, waiting for the person who needs it, is just remarkable to think about – and exciting for that person.”

Selwyn Vickers, dean of the UAB Heersink School of Medicine and chief executive of the UAB Health System and UAB/Ascension St. Vincent’s Alliance, said: “Today’s results are a remarkable achievement for humanity and advance xenotransplant into the clinical realm.”

Since the early 2000s, researchers have tried many times to genetically modify pigs through changes that reduce the chance of the transplant being rejected.

The human genes were added to the pig with the aim of helping to prevent rejection, both immediately and months or years down the line.

The natural lifespan of a pig is 30 years, they are easily bred, and can have organs of similar size to humans.

The procedure was conducted in much the same way that a human kidney transplant is carried out and, before the surgery, the brain dead recipient and donor animal even underwent a crossmatch compatibility test to see if they were a good tissue match.

The pig kidneys were placed in the exact anatomic locations used for human donor kidneys, with the same attachments to the renal artery, renal vein and the ureter that carries urine from the kidney to the bladder.

Mr Parsons was a registered organ donor through Legacy of Hope, Alabama’s organ procurement organisation, but after his death his organs were not suitable for donation.

His family allowed the UAB to keep him on a ventilator to keep his body functioning during the study.

Jim Parsons’s ex-wife, Julie O’Hara, said: “Jim would have wanted to save as many people as he could with his death, and if he knew he could potentially save thousands and thousands of people by doing this, he would have had no hesitation.

“Our dream is that no other person dies waiting for a kidney, and we know that Jim is very proud that his death could potentially bring so much hope to others.”

In the US, the wait for a deceased donor kidney can be as long as five years and, in many states, it is closer to a decade. Almost 5,000 people per year die waiting for a kidney transplant.

In the UK, more than 68,000 people are being treated for kidney failure, according to the charity Kidney Care UK,

The average wait for a transplant is about two-and-a-half years, and every day one patient will die while waiting.

The new study is published in the American Journal of Transplantation.

It comes weeks after medics in the US made history when they transplanted a pig heart into a human patient with terminal heart disease.

The animal had also been genetically engineered so its organs could survive in a human body.