'Only halfway through' - Stronger Storm Barra winds are on the way 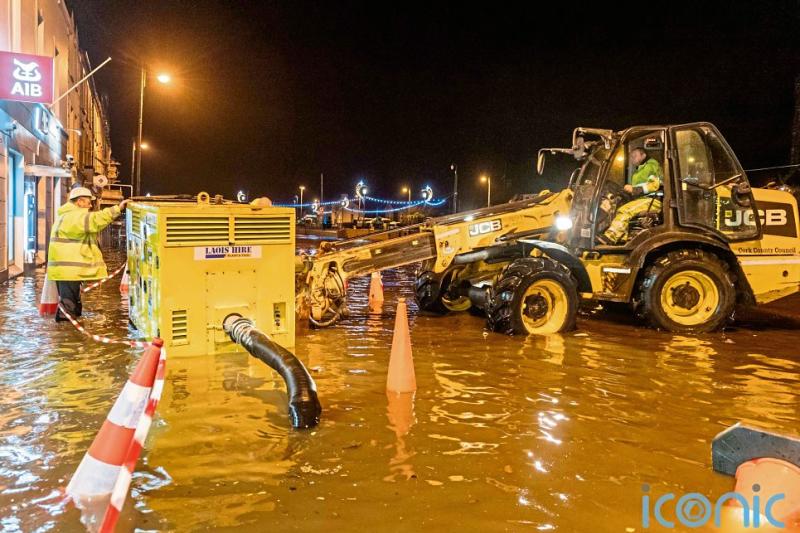 'Only halfway through' - Stronger Storm Barra winds are on the way

Storm Barra is only “halfway through” and the strongest winds could be yet to come, the Housing Minister has warned.

Some 56,000 homes are without power and may not be reconnected for a number of days, Government officials have said, after the country was battered by winds of up to 130km per hour.

The Defence Forces are to be drafted in for “extensive recovery operations”, to clear debris and damage caused by the storm.

Minister Darragh O’Brien said: “We are only halfway through. The winds may increase, and are projected to do so later in the day and into the evening.

“Not that there’s any sense of complacency. The public have responded really well, but just to be on their guard.

“I think people should be on their guard throughout today and into tonight.”

After making landfall on Tuesday morning, Storm Barra has caused flooding in southern parts of the country, particularly in parts of Co Cork.

The impacts have included flooding of 23 premises in Bantry in Co Cork, some other properties in Galway city and in Cork city.

There has been one report of a person being injured in the south-west of the country, although it is not yet clear if this is related to the storm.

Emergency financial supports are to be put in place for businesses damaged by Storm Barra, which will not be impacted upon by the supports in place for those hit by Covid-19 restrictions.

Schools, colleges and creches in some of the worst-affected areas were shut amid warnings that no part of the island will escape the effects of the storm.

The Minister for Education, Norma Foley, is to make an announcement later on Tuesday on whether schools will close for a second day on Wednesday.

Covid-19 test and vaccination centres will also remain closed in some parts of the country.

Minister O’Brien said people in red and orange level areas should not travel for vaccinations.

“We’re saying these people particularly in red areas to stay at home, not to leave home, and for people not to take unnecessary trips in other areas,” he said.

“The reality of it is one day, or a day and a half, is not going to impact substantially on what we need to do, with regard to our booster programme.”

Information on vaccination and testing centre closures will be provided through the HSE website and social media channels.

Met Eireann put in place a status red warning for counties Clare, Cork and Kerry, which means the storm could pose a “threat to life”.

He said: “People should remember to keep their mobile phones charged, because there’s going to be significant power disruptions throughout the country today.

“Even if your mobile phone is not showing coverage, there’s a good chance that you will be picked up on some signals.

“There will be disruption to the telecommunications networks throughout the country today.”

“I want to say to everybody to follow all the warnings of all the local authorities’ and emergency services’ advice and don’t go out and do anything stupid,” Ms Cusack said.

“The threat of flooding for Cork has now receded, there is flooding there but the high tide is on.

“The threat of flooding has now shifted to the east coast, particularly Dundalk and Drogheda, with the high tide just after 1pm.

“Very poor conditions at different times in different areas, right through the day and tonight as well.

“So everybody, keep safe.”

Business owners in Bantry, Co Cork, fought to keep flood water from entering properties while members of the fire brigade pumped away water.

Met Eireann has warned that disruption to travel and the power supply are likely, along with coastal flooding.

Gardai have urged anyone living in areas affected by red or orange warnings to avoid unnecessary travel.

Cork, Kerry and Clare have been given the red warning while an orange-level warning is in place for much of the east and west coast.

A yellow warning is in place for the rest of the country from 2am on Tuesday until 6pm on Wednesday.

Met Eireann said there is a strong possibility that the alert status of some counties could move from orange to red.

A UK Met Office yellow warning for Northern Ireland will remain in place from 6am on Tuesday until 9am on Wednesday.

The Irish Coast Guard has urged the public to avoid any activities that could expose them to “unnecessary danger”.