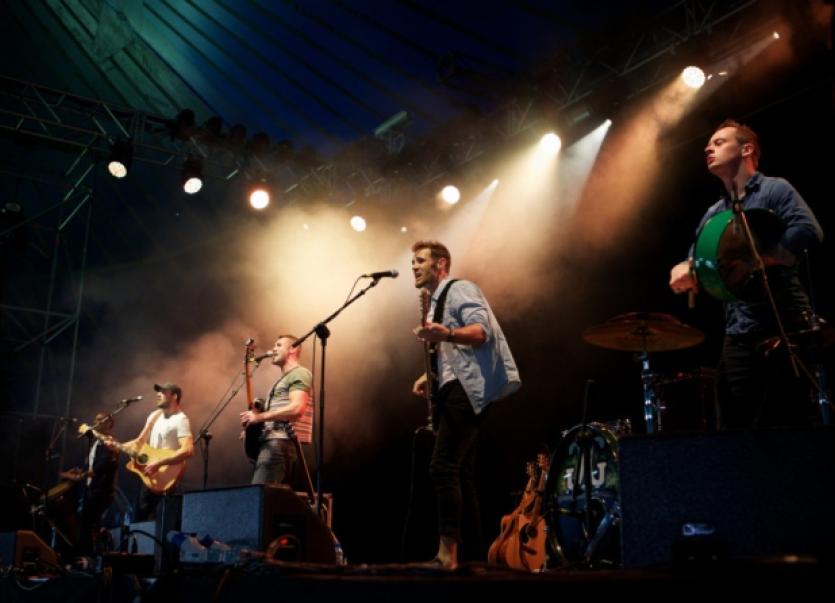 LIMERICK band Hermitage Green were the sole choice to back up the Second Captains on their new television show, which starts tonight on RTE.

LIMERICK band Hermitage Green were the sole choice to back up the Second Captains on their new television show, which starts tonight on RTE.

The folk rock quintet will join the five man crew behind the successful podcast - who left Newstalk’s Off the Ball in early March to some consternation - on their Second Captains Live show for the series.

Not content with being a mere ‘house band’, Hermitage Green will perform the theme for the show in the shape of their single Golden Rule, as well as performing at the end of each of the live episodes over the next four weeks, starting at 10.30pm tonight on RTE Two.

The Limerick band, who just last week played to over 6,000 people at Electric Picnic in a prestigious slot, can expect to see their profile increase at being selected to line out for the Captains on the new show, which will be closely watched to see if it can replicate the radio success the team have shared.

Barry Murphy explains that the former Off the Ball quintet were looking for a theme tune first and foremost, and then decided to ask the band to perform in studio with them on a weekly basis.

“They had been approached by RTE to do a pilot and perhaps four or five shows and wanted a band to be on it, and they thought of us,” explained Barry.

“They had seen us play live and saw us on the Saturday Night Show and liked the feel of that. For us it is a lot of work and there is always that aspect of not overdoing it in terms of the sport side of things, but it is cool and I love their idea of doing something a bit different to the regular shows out there,” he added.

There is something of a burgeoning ‘bromance’ developing between the band and the Second Captains crew it appears.

“I like that they thought they had gone as far as they could with Off the Ball and wanted to do something different,” said Barry.

“They are in and around the same age as us and are into the same things, I thought there was a nice bromance there between us! We all had this way of looking at Ireland, we love this country, so we have lots in common with them,” he laughed.

As for the high profile slot at the Picnic, Barry said the band were “blown away by the crowd”.

“The slot we got on the Sunday was class and the tent didn’t disappoint,” he said of the Electric Arena posting on the Sunday of the massive music and arts festival.

“We got great feedback and it was good to do a set that was foot to the floor for 45 minutes, and we didn’t put in any softer songs and kept it banging. We got good feedback both from people who had never seen us and those who had, who remarked that it was great to see how far we have come.

“Without getting carried away it was certainly a highlight to date anyway,” he added.s