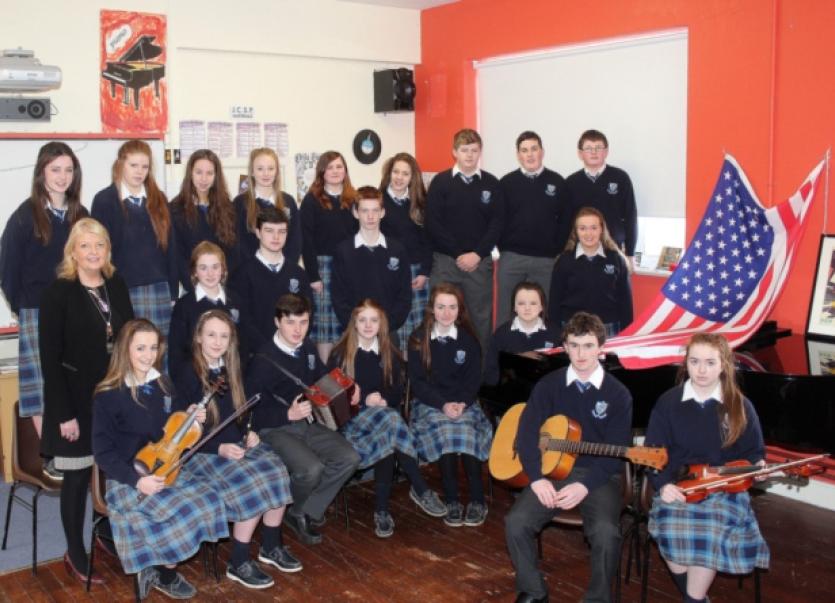 A group of young singers and musicians from Limerick is getting ready to perform in New York as part of the city’s St Patrick’s Day celebrations.

A group of young singers and musicians from Limerick is getting ready to perform in New York as part of the city’s St Patrick’s Day celebrations.

A group of 31 students from the choir in Coláiste na Trócaire, Rathkeale, accompanied by four teachers, two sets of parents and parish priest (and recently appointed Bishop of Waterford) Fr Phonsie Cullinan will travel to the Big Apple for six days from March 14 to 20.

Music teacher Jean O’Brien says the trip has been years in the planning.

“It was an idea and a dream I had for a long time. We had a lot of fundraising work to do. We have been fundraising for three and a half years and with help from the parents and teachers we have put on concerts and a racenight,” she explained.

“The community in Rathkeale really rallied around and gave us great support,” she added.

The group, comprising students from second up to sixth year, have a busy schedule for their trip. The day after they arrive, they will perform at a mass in a church in the Bronx which is expected to be attended by a large number of Irish expatriates.

The organisers have got a list of all the students’ native parishes and will be making contact with people from these parishes living in the area to invite them to the mass.

Afterwards, there will be a reception where, no doubt, more music and singing will take place. On St Patrick’s Day itself, the group will perform at a 9am mass in St Agnes’ church in Manhattan before travelling to see the city’s famous St Patrick’s Day parade.

Also on their schedule is a visit to an all-girls high school for an afternoon exchange of Irish music.

And, of course, the students will get a chance to do some sightseeing, taking in Ellis Island, the Statue of Liberty and other well known landmarks, before attending a Broadway show.

“They are really excited,” said Ms O’Brien. “They are working very hard at the moment to prepare for it.”

Meanwhile, it was also confirmed this week that one of the students who will be travelling with the group to New York, Enda Walsh, has been accepted to study under renowned opera singer and teacher Dr Veronica Dunne.

He is a transition year student in Coláiste na Trócaire and currently studies singing with Olive O’Brien in Limerick.

Enda was accompanied by Jean O’Brien and his father Victor when he went to meet Veronica Dunne last week. They were also joined by Sarah Shine who is currently a student of Dr Dunne’s.