Limerick welcomes the ‘Bandits back for ‘Christmas Fistfight’ 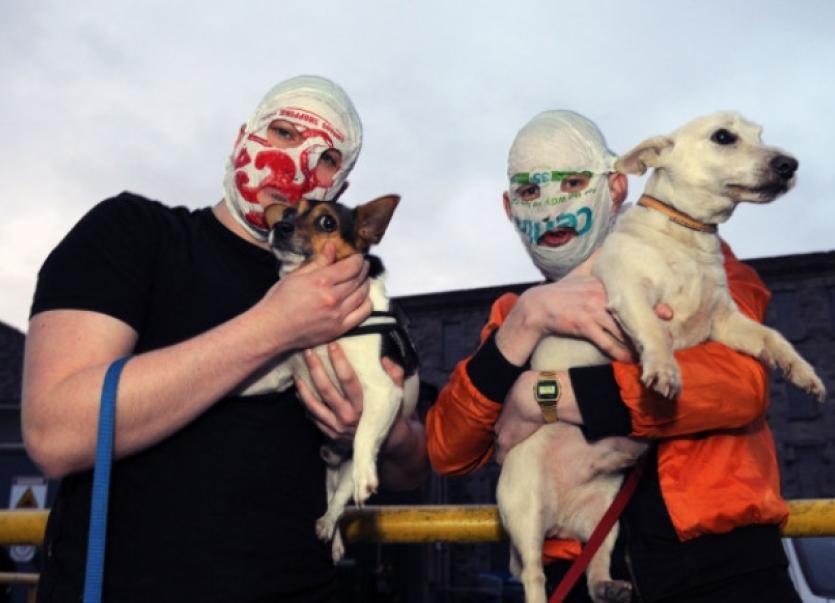 2014 was another memorable year for the Rubberbandits, who are proving as popular a draw as ever in the UK but return to Limerick for a first gig in some time.

2014 was another memorable year for the Rubberbandits, who are proving as popular a draw as ever in the UK but return to Limerick for a first gig in some time.

The duo return for a rare gig in their native Limerick this December with Christmas Fistfight, a take on their highly successful stage show that sold out some 60 nights in London this year.

The duo, who also sold out some 30 nights in Edinburgh and will head to Liverpool for a theatre run next year, have worked hard to move away from the Horse Outside hysteria that blew up in 2010, preferring to focus on darker songs such as the quite unsettling, blackly comic Fellas and Dad’s Best Friend, both released this year.

Blind Boy Boat Club said recently that Horse Outside was “fine and mainstream and fun, but wasn’t fun for us”.

“We have gone through a sustained period of deliberately losing fans by releasing increasingly weird shit,” he said.

“It is getting weirder, which we are happy to do, because we want to make the stuff that we would like to see.”

Speaking to the Limerick Leader this week, Blind Boy said “nothing in the world beats a Limerick gig”.

“All we ever dreamed of when we started out was to do a gig in Dolan’s Warehouse. We’ve done about ten of them at this stage but that was the tip of the iceberg to us when we were 16, we never thought it would go any bigger than that,” he said.

Speaking about Christmas Fistfight, he said it was a “musical”.

“We’ve never done it in Ireland, because it requires the audience not to shout things at us when we are talking, which Irish people tend to do,” he said.

“So if ye’re coming to our Dolans gig try not to shout things at us during the bits when we are talking. That’s literally the only reason we’ve never done it in Ireland.”

The gig starts at 8pm sharp, so you have been warned. Of next year, Blind Boy’s resolutions involve planning to “drink a handful of water out of the Shannon river every day to see what happens” and a proposal for the Chicken Hut.

“We have a marketing idea for the Chicken Hut - purveyors of legendary Limerick chicken and gravy. We want them to start selling those chicken popper things, with cocktail sticks and a tub of gravy for dipping. However, there’s a catch.

“They can only use this idea if you call the product “A pack of Gowls”. Hands up who doesn’t want to buy a delicious pack of gowls like? They can’t say no, we’ve worn their bags on Channel 4. They owe us.”

In the interim, the Bandits are promising a new song and video which will be out in “a few months”. But Blind Boy has little in the way of positives to offer regarding the Irish music industry.

“The Irish music industry is non existent. There’s plenty of creative bands and artists making music, but the industrial structures that traditionally make money from that music don’t exist anymore,” he says.

“Just put all your stuff out for free or on Spotify and hope that you can get a few gigs. You don’t need a manager, you need an agent, you don’t need a record label, you need a Twitter and a Facebook following. That’s the Irish music industry in 2015. Yurt.”