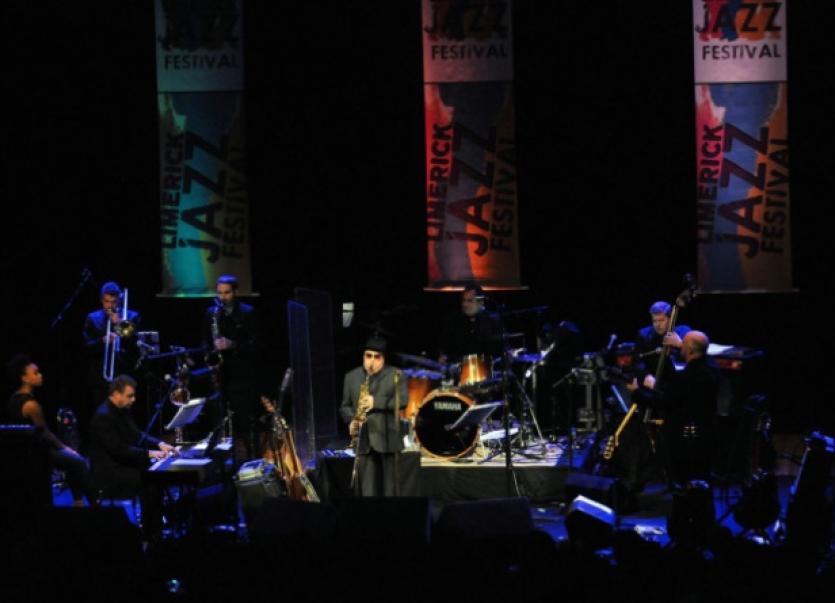 WITH the merest flick of a finger or a subtle glare from behind dark sunglasses, the conductor orchestrated his backing band.

WITH the merest flick of a finger or a subtle glare from behind dark sunglasses, the conductor orchestrated his backing band.

Standing at a gold microphone, supported by gold plated stand, and barking the instructions like a miniature version of Mussolini, was Van Morrison.

The Belfast troubadour put in a stunning showing as the headline act of the Limerick Jazz Festival, flanked on a University Concert Hall stage - in front of a capacity crowd - by a simply must be seen to be believed seven piece band.

Included among the ranks was Limerick man Dave Keary, whose guitar chops on the Sonny Boy Williamson and John Lee Hooker standards in particular, shone like a light among gifted musicians.

Morrison exuded confidence in an intimate setting for an audience that had shelled out almost €90 a ticket to see him and who thrilled in the jazzy, almost swing versions of his classics such as Someone Like You, Moondance and Brown Eyed Girl, which were tailored to suit the jazz festival ethos.

But it was the confidence oozing from the band on a blistering Please Don’t Go and the saxophone finish by Morrison on Only A Dream, the quivering emotion on Precious Time and the atmospheric feel to Walk on the Wild Side, that particularly impressed.

As the band played on in an extended jazz groove on Brown Eyed Girl, Morrison departed the stage after a 90 minute set and headed straight for home.

But the feedback was good, said festival organiser John Daly, as the musician subsequently raved about the respectful crowd to fellow musician David Sanborn, who played in the Lime Tree on Saturday night as part of the festival.

“He really did make the songs jazzy and that is professionalism that he can do that. He is singing incredibly well. His voice is ridiculous. The sound was so good,” said John Daly.

“To be so close to somebody like him, because you are normally looking at him on a big screen or a dot on the stage, was special.

“The night after the gig he went over to see Sanborn in Ronnie Scott’s. They got talking and he asked Van if he enjoyed the gig and he said he did and that the audience were fantastic.

“That is a good thing for those guys to be saying, because they are at the top of the tree. Everyone who played had nothing but good things to say about the venues, the festival and how they were treated and that is the kind of stuff you need them talking about when they go back so the word spreads.”