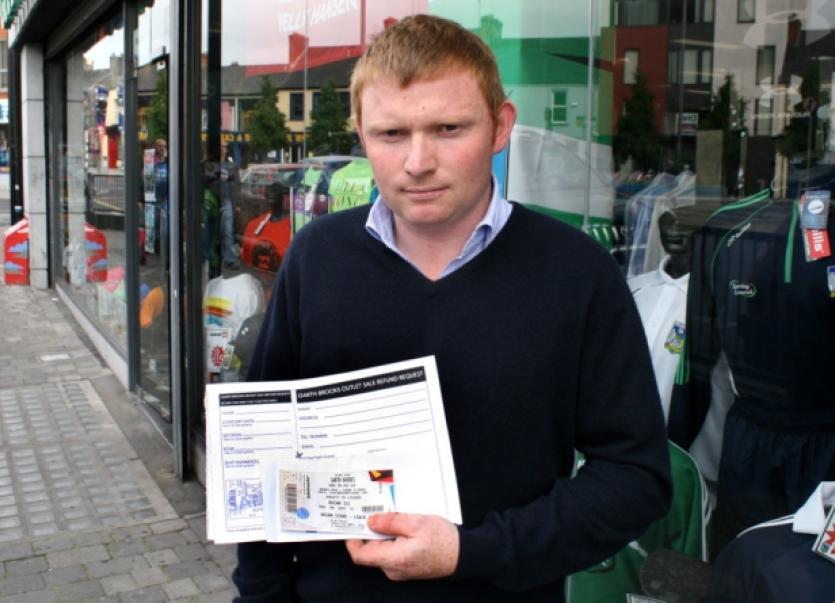 CRESTFALLEN Garth Brooks fans face a lengthy wait for ticket refunds with the process starting last Thursday and taking up to 21 working days, according to Ticketmaster.

CRESTFALLEN Garth Brooks fans face a lengthy wait for ticket refunds with the process starting last Thursday and taking up to 21 working days, according to Ticketmaster.

Fans who queued for days and also paid for their tickets in cash will not be refunded from the outlets where they bought the tickets.

Limerick fans who returned to Gleeson Sport Scene, where they purchased their tickets last January, were informed that cash refunds will have to be applied for through Ticketmaster.

All purchases made through card will be refunded directly.

One disappointed fan– Susan Sheehan from Pennywell, who arrived at Gleeson Sport Scene at 9am on Thursday morning – was unimpressed that she could not be refunded in cash. However, the situation is beyond the control of the local ticket agent.

John Canty, who also returned to get a refund for his four tickets, said that 21 days is too long to wait.

“It is just an unfortunate situation. You have to wait 21 days – it is not really fair. It said ‘up to 21 days’, and I am just hoping that it wont take it that long to happen,” said Mr Canty.

Garth Brooks singled out Limerick fans in a press conference before the five concerts had been officially cancelled, saying that they had been particularly influential in the fourth and fifth dates being added.

“Peter [Aiken, the concert promoter] told me I have 100,000 people still looking for tickets and so we talked about a second on-sale [for the additional shows], especially because of one town, Limerick – the on-sale went horribly wrong for them,” said the country singer.

Limerick traders, such as Dunnes, Harveys Quay, are now selling off merchandise they had bought in preparation for Limerick fans travelling to the five Croke Park gigs.

Over €25m is to be refunded by Ticketmaster to ticket holders in the coming weeks.

The reputed cost of the cancellation of the concerts to the Irish economy is €50m.