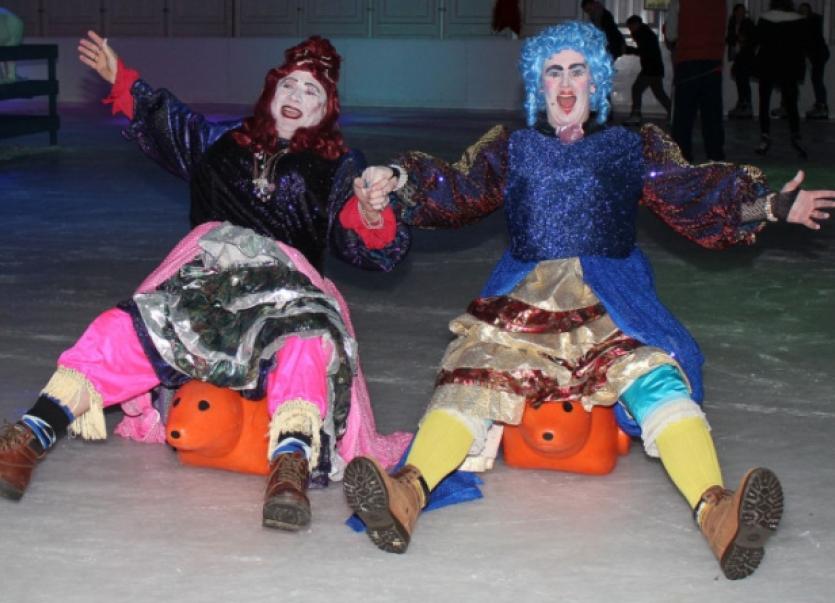 THE Ugly Sisters on ice, in full costume - what could go wrong?

THE Ugly Sisters on ice, in full costume - what could go wrong?

Limerick Panto Society is back and marking its 30th anniversary of producing top class panto with Cinderella, starring Emma O’Driscoll, in the Lime Tree this Christmas.

To mark this significant milestone, the Limerick Leader met up with the anti-heroes of the show at Limerick On Ice recently - Esther and Poly Fabric (pronounced Fabreeek) for a full in-character interview.

After posing for pictures on the ice in full Ugly Sister garb, the terrible twosome told us about their sister Cinderella.

“She’s horrible. She’ll be upstairs in the bedroom, fixing all our clothes, putting out the makeup for us. She is only a skivvy for us really, she does all the house work for us. She hasn’t got our build,” says Poly.

“She hasn’t got your build anyway,” laughs Esther.

Asked if the duo give her a hard time, Poly said: “No, no, we are very good to her, we leave her do all the work for us, keep her fit. She likes to sit down for a while, so we keep her busy, give her jobs to do around the house, keep her active.”

“I think she likes it, because it keeps her trim, she looks trim,” said Esther.

“Ester, you are not very trim - I suppose the dress is wrong,” retorts sister Poly.

“That’s right, I am only a size eight you see. Size eight big.”

The Ugly Sisters are promising “fun, laughter, games - beauty of course, from us - not Cinderella,” they laugh and the “gorgeous voices” of Esther - better known as Tim Cusack - and Poly, or Damian Shaw, panto stalwarts both, who grin from ear to ear when discussing the form seriously, boasting a John Finn penned script and resting in the able hands of producer Tony Cusack.

“It is 30 years now,” says Tim. “It is scary when you think about it but we wouldn’t know what Christmas would be like if we didn’t have the panto. Christmas Day for me is have the dinner - most people will sit down and watch a movie and fall asleep - and then sit down and learn my lines and go through my song,” says Tim.

“Cinderella is the classic panto. Because of the Ugly Sisters you have two dames, which offers a double impact of laughter and craic.

“There will be plenty of laughter, songs and dance and everything, audience participation is a big thing with panto, that is the main thing. Seeing the look on the kids’ faces,”  he adds.

Shauna O’Halloran will feature as mother to the sisters, with the role of Prince Charming to be shared between two actors, Mícheál Ó Dubhghaill and Paul Kelly.

Dandini will be played by Keith McGuane with the talented Nastasia Vashko as Maid Marian, while Buttons will also be shared between Peter O’Brien and Stuart Mackey. Children from Spotlight Stage School and Expressive Arts also feature.