Limerick ahead of Clare in the musical match-up 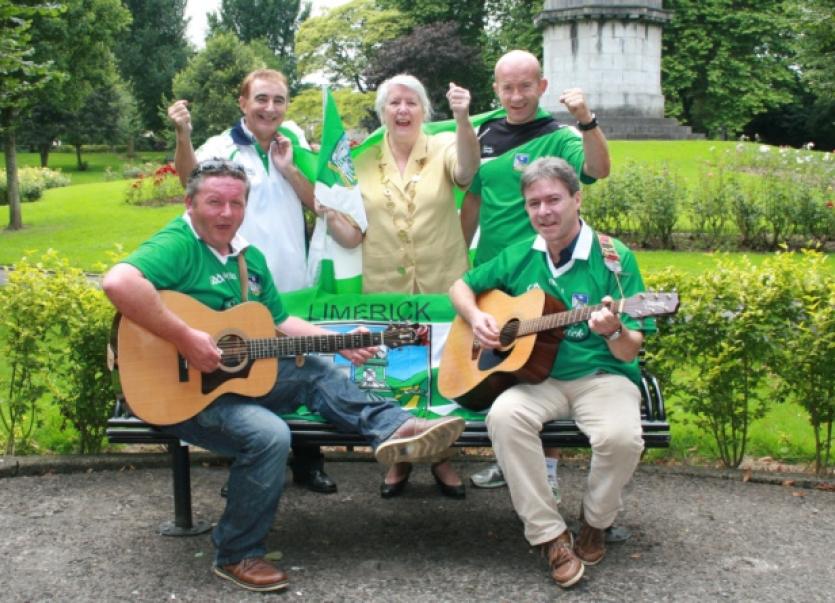 LIMERICK won’t do all its talking on the pitch this Sunday, as not one but two tribute songs have been recorded ahead of the All Ireland hurling double header on Sunday.

LIMERICK won’t do all its talking on the pitch this Sunday, as not one but two tribute songs have been recorded ahead of the All Ireland hurling double header on Sunday.

The county has already beaten Clare in the song stakes as two groups of local musicians have recorded two catchy offerings to commemorate Limerick’s glorious run to the All Ireland hurling semi-final this weekend.

And, if the teams manage to win the minor and senior semi-finals and make the final, the songs might yet “explode” onto the public’s consciousness.

The Corrigan Brothers - authors of There’s No One As Irish As Barack O’Bama - together with Eurovision composer Shay Healy have come up with Sporting Limerick - Hurling’s Coming Home, while well known Limerick band Free Beer have recorded Luimneach Abu, with the proceeds from the latter to go towards CARI and the Children’s Ark Unit in Limerick University Hospital.

“After the Munster final, Shay Healy rang me and said we have to do a Limerick song, he was watching the crowd scenes on the telly,” said Ger Corrigan this week.

“We haven’t officially released it as a single yet, we are not going to do that unless they get to the All Ireland final, but we have made a number of copies just for some special Limerick people,” he added.

“If Limerick get to the final we will release it officially on CD. We won’t release it beforehand, we don’t want to tempt fate. We certainly want to celebrate the Munster final win and the atmosphere, and we were blown away by the reaction from all over the world to the song. “There is huge interest from the Limerick diaspora all over the world,” explained Ger, who lives in Castletroy and is going to Sunday’s match, adding that the song will feature on the band’s forthcoming album, A Box of Tricks, in October.

Patrickswell’s Trevor Griffin, of six-piece band Free Beer, explained that Luimneach Abu would likewise be ramping up promotion for the song if Limerick are triumphant on Sunday.

“We don’t want to go too mad before the semi-final and pre-empt what might happen, but at the same time, if we can make some money for the charities, that would be great,” he explained of the band, which also consists of fellow Patrickswell men Peter O’Reilly and Daragh Naughton, plus Adare man Padraig Kearney, Cork’s Austin Newman and Galway’s Michael O Dubhghaill, both of whom live in Limerick.

“After the Munster final we decided we should write a song for the hurling team, and got in contact with Live 95FM to see if they would be interested in playing it,” explained Trevor, a teacher in Castletroy College.

“They actually said that they were looking for an official song and would give it loads of airplay if any proceeds went to their 95 stop tour, which benefits CARI and the Children’s Ark Unit in Limerick University Hospital, which we were delighted to do when they asked,” he added.

The song has been viewed 15,000 times on You Tube in just a matter of days, and is available to download from iTunes. It is also for sale in Smyth’s Bar in Denmark Street in the city.