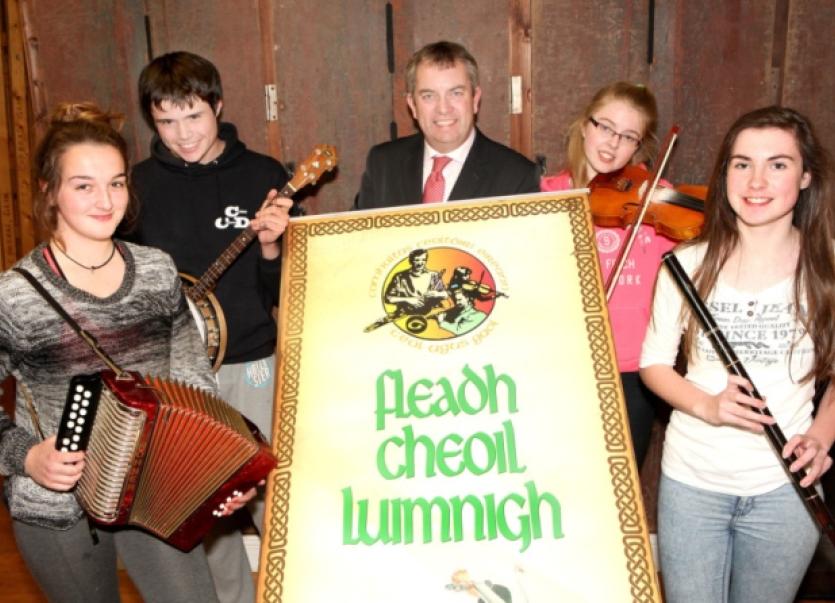 HOSTING the County Fleadh is a challenge, and a big undertaking for any community. But Glin has stepped up to the plate half a dozen times before and is now looking forward to being the centre of traditional music in Limerick for the seventh time this June bank holiday weekend.

HOSTING the County Fleadh is a challenge, and a big undertaking for any community. But Glin has stepped up to the plate half a dozen times before and is now looking forward to being the centre of traditional music in Limerick for the seventh time this June bank holiday weekend.

But, says Cllr John Sheahan, who is chairman of the Glin Fleadh Coiste, people can look forward to almost a full week of music, singing and entertainment. topped off by the competitions.

“There is a great tradition here down the years,” said Cllr Sheahan, who is a noted singer himself. And there is great pride in the locality at having produced a long line of musicians, as well as lots of All Ireland winners.

“There is a general good feeling in the town. We are delighted to be hosting the County Fleadh again,” he added.

“It is a lot of work but it is to be welcomed,” says John Healy, who is the chairman of the local Comhaltas Ceoltóirí branch and a man who has been the backbone of traditional music in the area for many years. The local coiste, he adds, has worked in tandem with the county board to ensure all aspects of the County Fleadh run smoothly.

Hundreds of musicians are expected in Glin for the two days of competitions on Saturday and Sunday, May 30 and 31. And already, the arrangements are in place to accommodate the 700 or so entries that have been received for the dozens of competitions which range from flute and fiddle to sean nós dancing and céilí bands.

Every hall and space in Glin has been made ready for the musical invasion but the local national school will serve as official headquarters.

Meanwhile, in a community which has been the cradle of the distinctive West Limerick style of Irish music and which has produced more than its share of fine musicians, non-competitors are also being catered for in a programme with a wide appeal.

The fun kicks off this Saturday with an Irish Night at the Knockdown Arms and then moves into its stride next Tuesday with an historical walk through Glin Castle Gardens, guided by Tom Wall and starting at 5pm, followed by a talk by local historian Bernard Stack.

This “pop-up” exhibition is focused on the Irish language and will feature artefacts and other material gathered by Eiblín Ní Mhaoldomhnaigh.

The Ionad will be open to visitors for the remainder of the Fleadh which will be officially launched at 7.30pm in the Square on Friday, May 29.

There the winners of an art competition, will be presented with their prizes and this will be followed by a Coirmcheoil Mór in Ceol Corbraí which will feature many past winners and stars of the local Comhaltas including various groups.

The core feature of the Fleadh, the competitions will begin at 10am on Saturday and run throughout the day and again on Sunday.

Saturday evening will see open-air entertainment in the Square, following the Aifreann Traidisiúnta and the unveiling of a memorial plaque to the late Michael Meade, organist and choir master in Glin for 60 years.

Sunday afternoon at 3pm, there will be a special performance in the Square of Tin Whistle Bands from across the county. The Fleadh will conclude on Monday evening with a busking competition.