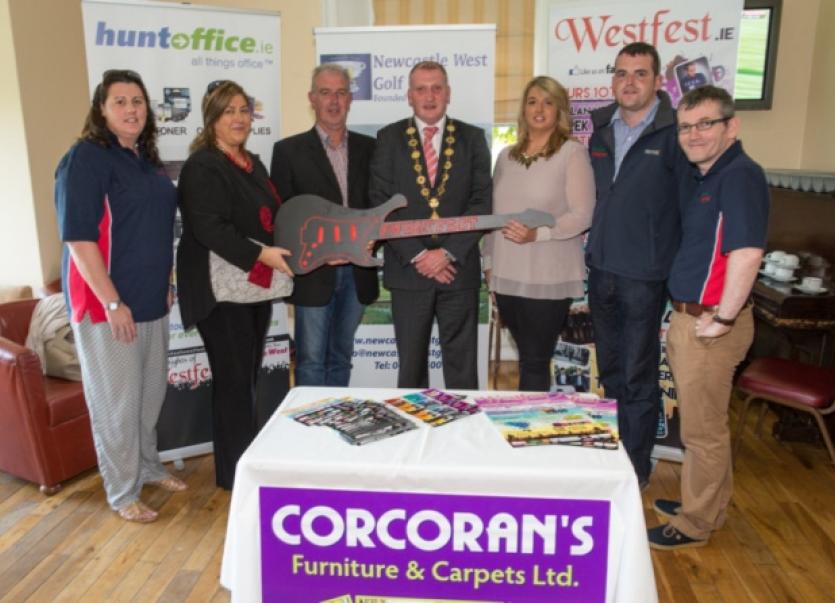 GREAT entertainment on your own doorstep is the mission statement of the Knights of WestFest and the organisers have been delivering on this objective since 2011.

GREAT entertainment on your own doorstep is the mission statement of the Knights of WestFest and the organisers have been delivering on this objective since 2011.

Now, WestFest 2015 promises to outdo all previous festivals and break all previous targets with a big-hitting music line-up and a bunch of international acts.

“We’ve come from having one headline artist, Mundy, in 2011 to The Coronas selling out the main square last year,” Siobhan Kelly, a founding member of the festival and liasion officer with the musicians.

“Now on our fifth birthday we have 12 international acts coming to town.”

Walking on Cars, UB40, Example, The Riptide Movement, The Stunning and Hudson Taylor are among the big-name acts that are being brought together in Newcastle West for the four-day festival which runs from September 10-13.

And in addition, there will be a Festival Food Court as well as entertainment for all the family, with bouncing castles, drumming workshops, fireworks, a 5k color run and a Carnival.

“The festival has provided a stage for people to enjoy established artists on their doorstep in a proper festival environment,” Ms Kelly said. This year, the festival entertainment will move from the Square to the GAA grounds in the Demesne. But Ms Kelly stressed, they would be retaining their reputation for giving value for money to festival goers. An all-in ticket costs just €49.

This year, the organisers are hoping to attract over 35,000 people to the festival. And they have invested over €350,000 to make it happen. But they are confident the economic spin-off for the town and surrounding area will be a multiple of this. About one in every five tickets sold is expected to come from outside the country with high demand for local accommodation.

The festival will open with Declan Nerney and the rising King of Irish Country, Derek Ryan while on Friday night, one of Ireland’s most imaginative bands, Walking On Cars will perform with support from Róisín O.

The headline act on the Saturday night of will be the UK Reggae group UB40 along with Top UK Artist Example and a four piece Dublin Rock Band The Riptide Movement.

Tickets can be bought online at www.westfest.ie, but you can also pay per day.