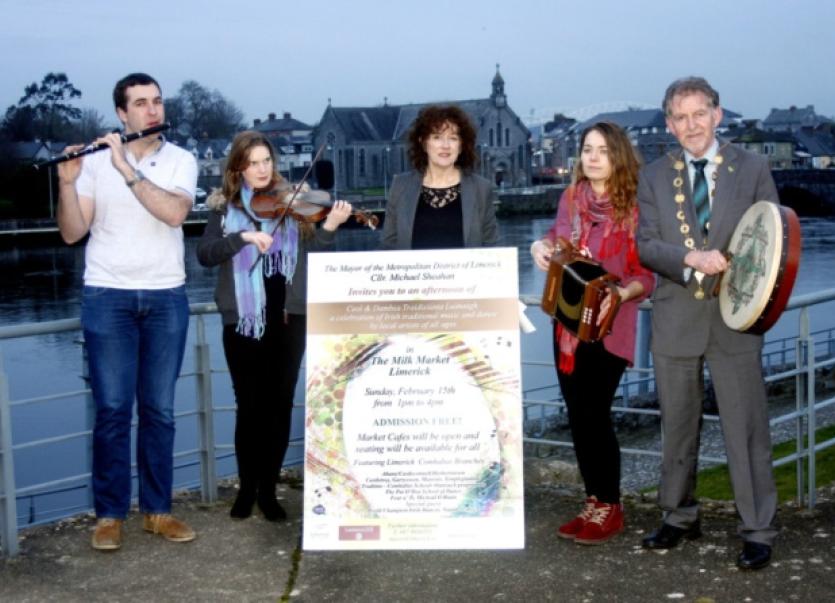 A “FEAST and a festival” of traditional Irish music is being promised at a special event in the Milk Market next weekend.

A “FEAST and a festival” of traditional Irish music is being promised at a special event in the Milk Market next weekend.

Comhaltas groups from across Limerick City and County have been invited to take part in an afternoon of music and dancing in the Milk Market on Sunday, February 15.

The brainchild of Mayor of the Metropolitan District Cllr Michael Sheahan, the event will see comhaltas branches from Ahane, Castleconnell, Ardagh, Castletroy and Garryowen among others come to play their music.

They will be joined by champion Irish dancer Niamh O’Brien, who hails from the city’s northside.

Mayor Sheahan, who grew up in a tradition of Irish music in Askeaton, said: “I always wanted to put on a little performance of some sort. The Milk Market is the venue for it. It will showcase all that is best about Irish music in Limerick”.

Joining the mayor at the launch in City Hall this week were three members of the Irish World Academy of Music based at UL.

They were David Crowe, Eva Kyle and Alisha McMahon.

Mayor Sheahan said the Milk Market is an ideal venue for what he hopes will become an annual celebration.

“There is no excuse for people not to come in. I am hoping this will be so successful, it will be the start of promoting our traditional culture here, showing pride in it, and promoting the market too,” he said, “The great thing about this is that it is in a beautiful location under the canopy and the shelter of the Milk Market. It is free to all, and the pavilion units will be open for people to buy tea and coffee.”

Mayor Sheahan says he hopes 200 people will turn up - and the festival will continue beyond the allotted three hours.

“We will make a right carnival fleadh out of it,” he said, “People in the city and suburbs have not been exposed to Irish music. It tends to be a tradition that it is played by the people who love music. This is an opportunity to spread the gospel.”

Although Mayor Sheahan says the line-up of players is “99% there”, he would still like to hear from groups who would like to be part of the event.