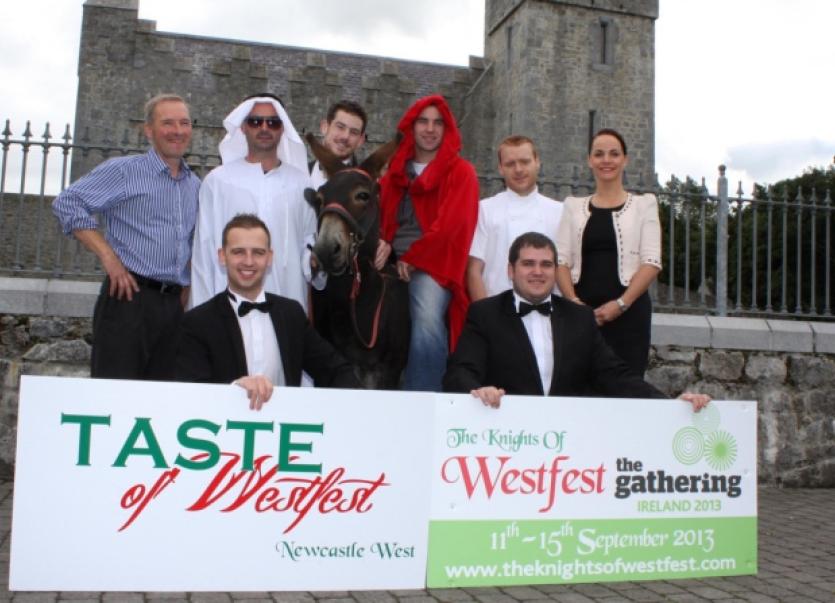 BETWEEN live concerts, food fairs and adventure races, there will be no shortage of things to amuse and entertain the thousands of visitors set to arrive in Newcastle West this weekend, when the town hosts its now-famous ‘Knights of Westfest’ event.

BETWEEN live concerts, food fairs and adventure races, there will be no shortage of things to amuse and entertain the thousands of visitors set to arrive in Newcastle West this weekend, when the town hosts its now-famous ‘Knights of Westfest’ event.

Despite only being in its third year, the county capital’s late summer festival has grown into an eagerly anticipated catch-all event that gives people a chance to smile at every turn.

The festival, which draws on the legacy of Newcastle West’s famous old Ten Knights of Desmond event, has been built from the ground up by a committed bunch of local volunteers who were working flat out this week to put on the finishing  touches.

“If we’ve forgotten anything, it’s too late now!” committee member Ida Dunworth said this Wednesday. “There’s an awful lot of work going in this week. We were out until 2.30am on Tuesday. The flags are up all over the town. These flags have our hearts broken! But we’re excited. You’re trying to showcase the town at the end of the day. That’s the whole point.”

The festival began this Wednesday night, September 11, with a business showcase at the Courtenay Lodge Hotel. The event featured stalls from over 50 local companies that have contributed to making the Knights of WestFest a continued  success.

The weekend events begin this Thursday, September 12 when the festival is officially opened on the main stage in the square by members of the Munster champion Limerick senior hurlers. A barman’s race and live music will round off the night.

On Friday the Knight of Desmond pageant begins on the main stage, after a performance by Irish music and dance act Celtic Steps. Friday will also see the first event of this year’s Taste of WestFest food fair: a ‘twilight taste’ event in the grounds of the Desmond Castle  from 7pm.

Saturday will see the first of two days of the Taste of Westfest main event in the grounds of the community centre, with over 30 stalls from artisan food producers and local restaurants. On the main stage, weekend headline act Boyce Avenue will kick off their European tour from 9pm, following a performance by Hermitage Green at 7.45pm.

The ‘Knights Crusade’ adventure and endurance race also takes place on Saturday, as part of the Westfest calendar.

Sunday will see the second day of the Taste of Westfest event, with the highlight being a ‘battle of the chefs’ contest. The Demesne will also host the return of last year’s popular donkey derby event from 1.30pm. This year’s race has been kindly sponsored by Flynn Tyres.

A number of local bands will perform on the main stage from 5.30pm, followed by the announcement of this year’s Knight of Desmond. The festival will be brought to a close with a fireworks display and performances by Sharon Shannon, Mary Coughlan and Frances Black.

Ms Dunworth said that the weekend will only be made possible thanks to the dozens of volunteer stewards and organisers who have given so much of their time and effort. “I just want to say thank you to all of them.

“They’re ambassadors for the town, and they’re going to be welcoming people into Newcastle West”.

For more information about what will be happening where during the 2013 Knights of Westfest event, log on to the event’s website, www.theknightsofwestfest.com, or check out its Facebook  page.