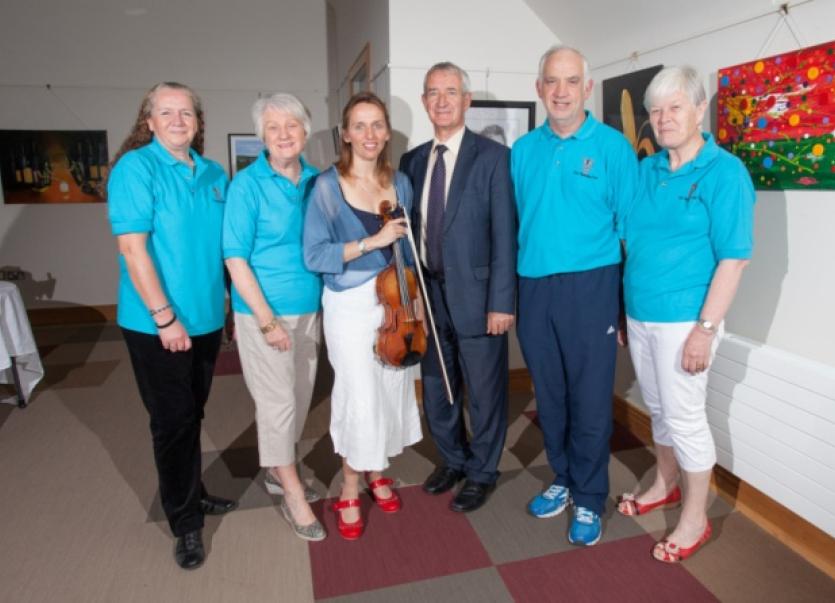 A SUMMER evening filled with music is promised when the Irish Chamber Orchestra comes to Rathkeale for the final leg of their national summer tour.

A SUMMER evening filled with music is promised when the Irish Chamber Orchestra comes to Rathkeale for the final leg of their national summer tour.

And, although the event is being hosted by the Rathkeale Community Arts Group, two local charities, The Butterfly Club and the Street Children of Bucharest will benefit from the event which takes place in St Mary’s Church, Rathkeale on Sunday, July 19.

“We have been to Ballingarry for the past two years and it is great to come back to Rathkeale,” Charlotte Eglinton, PRO for the Irish Chamber Orchestra said at a reception to launch the Rathkeale concert  this week.

And she predicted the programme, Four Seasons Twice would prove ideal.

“This is the ultimate programme to bring anybody to who doesn’t know much about classical music,” said Katherine Hunka, director of the Irish Chamber Orchestra, as she quickly delivered a tiny taste of it on her violin.” It won’t put people off classical music.”

The idea for the programme, she explained, had come following their concert in Ballingarry when a member of the audience asked: Why don’t you play something we all know?

And so, she continued, the programme includes the very popular and iconic Four Seasons by Vivaldi, which never fails to enchant with its freshness and musical brilliance. Each season features three short movements, prefaced by a sonnet full of ideas that are then repeated in the music. “Members of the orchestra will read little bits out. It really brings it to life for the audience,” Ms Hunka said.

The second part of the programme will feature Piazolla’s The Four Seasons of Buenos Aire, which, Ms Hunka promised, would bring the lively, infectious sounds of South America to the audience.

Representatives from the two designated charities attended the launch, held in the Rathkeale Arts Centre. “It is great that groups like yours make organisations like ours run smoothly. We hope we all have a great night,” said Pam McNamara, chairperson of the Butterfly Club which, for the past decade, has provided a regular social outlet as well as summer camps for children and teenagers with special needs throughout West Limerick. The Saturday clubs and summer camps also provide respite for their families.

Brian Geary, on behalf of the Street Children of Bucharest charity, explained that for the past 15 years they had been working to take children off the streets and out of the sewers which they had made their home and providing them with food, clean clothes and a chance to change their life. “It is horrible what happens to children on the streets,” he said. In the early days, he continued, they placed children in residential centres but now they concentrate on providing education, particularly at pre-school level. The children are staying off the streets and going on to further education, he explained. “We are only able to keep going through the generosity of the Irish people,” Mr Geary said.

“It is great to see the Chamber Orchestra coming back to Rathkeale,” Rathkeale Community Council chairman, Pat Neville said, adding that he was confident people would like the programme the orchestra was planning. “This is a very popular programme,” he said, “And the church is a lovely setting as well.” Tickets for the concert on July 19 cost €20 each or two for €30. They can be bought at Rathkeale Post Office and John’s Menswear, Rathkeale or by ringing 086-1249955.