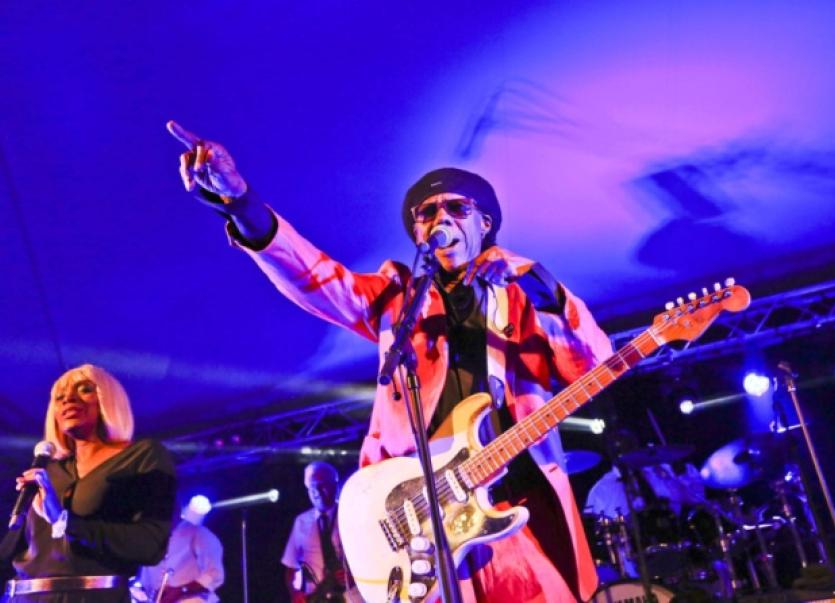 AFTER more than two hours racing through a set list bursting with hits, Nile Rodgers told a frenzied Limerick crowd: “Bring us back, we will stay for a whole week.”

AFTER more than two hours racing through a set list bursting with hits, Nile Rodgers told a frenzied Limerick crowd: “Bring us back, we will stay for a whole week.”

There is little doubt, judging by the crowd’s reaction in the sold out Big Top venue in the city’s Milk Market, that they wouldn’t be averse to dancing their way through another seven nights of disco classics, performed by the charismatic Rodgers and his band.

Paying little attention to the teeming rain falling outside the venue, Chic and Rodgers treated a sold out crowd to another strutting stomp through both Chic’s back catalogue and those hits that Rodgers and his trusty Fender guitar have worked their magic on - an estimated $2bn or thereabouts.

Flanked on either side by stunning vocalists Kimberly Davis and Folami, Rodgers, dressed in a red suit and trademark black hat, treated the crowd to deliciously reworked versions of Sister Sledge’s We Are Family, Lost In Music and Thinking Of You - which he wrote and produced with Bernard Edwards - Madonna’s Like A Virgin and Bowie’s Let’s Dance - both of which he produced - and Chic’s own Le Freak, finishing with Good Times and a by now customary ‘disco party’ on a stage full up with crowd members, including Valerie and Mick Dolan of Dolan’s, bookers for the venue, who were invited up to dance.

“We have to thank the Dolans for bringing us back,” Nile told the crowd. “They took a massive chance because we are not the most loved band,” he added, to a chorus of boos from the audience, clearly not impressed with that sentiment.

This was the second time in two years that Chic and Rodgers have played the venue and the set-list was largely similar and the interaction with the crowd familiar.

Rodgers told stirring tales of his battles with illness and declared himself “cancer free - I have no idea what that means but I am happy to be here with you,” to an ear splitting roar of approval from the crowd.

He was quick to assure the crowd that this was no mere “covers band - we are a funk, soul, disco band. We put our little spin on everything we do.

Later, he would add: “We have so many number ones, we could play for three or four hours.”

It was no throwaway remark, and you could imagine this, “the world’s greatest dance band”, returning to the venue in the near future for another stunning spin through years of disco heritage - regardless of the weather outside or the day of the week.