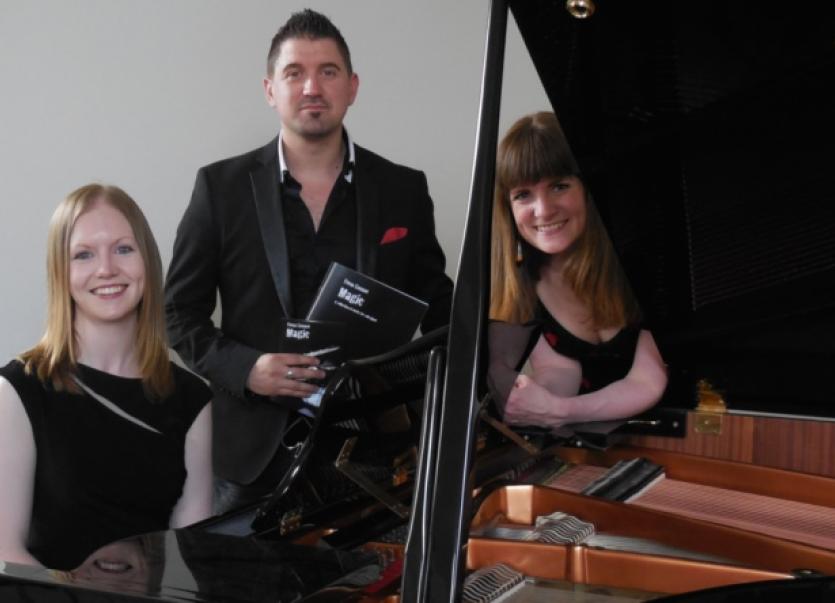 Limerick composer Fiona Linnane released her first album of original music at the weekend with a launch in the Rathkeale Arts Centre.

Limerick composer Fiona Linnane released her first album of original music at the weekend with a launch in the Rathkeale Arts Centre.

Entitled Magic, the album features 11 tracks for solo piano, all performed by Aoife Chawke from Croagh. It is also being released as a book of sheet music.

A native of Cratloe, Fiona lives in Kildimo and is well knows for her work on a wide range of musical projects in Limerick and further afield. She is director of new music ensemble CoMA Limerick and her work has been performed in Ireland, Britain, the United States, Canada, France and the Czech Republic including performances at Vox Novus Fifteen Minutes of Fame (New York), the inaugural Limerick Sings Choral Festival, the Kate O’Brien weekend 2012, Burren in Bloom Festival, Cork Choral Festival, Culture Night (Ireland) and Love:live Music Day.

Her choral work, Spirestone - which she described as “a lovesong to Limerick city” - had its world premiere in the University Concert Hall in April.

This is Fiona’s first full album and features some of her older works as well as a number of new pieces. The title, she explains, comes from the idea of “being inspired by everyday things”.

“For example once on a trip to Paris, we came across a broken merry-go-round and one of the pieces is based on the fun we had with that - moreso than we would have had if it had been working,” she says.

Another set of piece was written for her nephews and nieces and is based on the dates of their birth.

Fiona says there is “quite a variety of styles” featured on the album which was recorded over the course of three days last month in Shountrade National School in Adare.

The money to record and produce the album was sourced through FundIt - a crowd funding site whereby members of the public can donate money to support a particular project. Fiona was delighted with the response, with the total money donated exceeding what she had originally sought.

The album will be available from Fiona’s website, www.fionalinnane.com and the book of sheet music is available to buy in Savins.