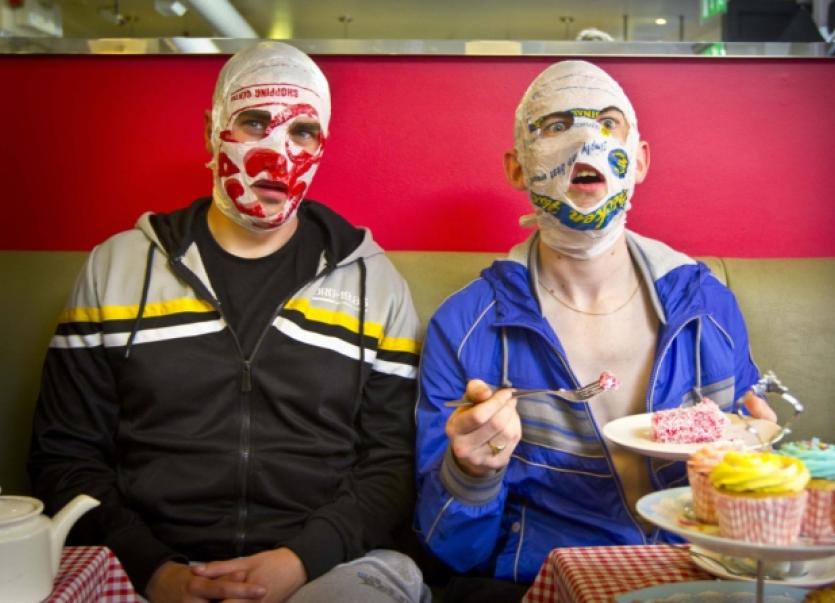 The plastic-bag wearing musical comedy duo began an 18 date run in the Soho Theatre this week.

The show, a world premiere, has already received rave reviews, with The Telegraph, in particular, proclaiming the duo as “heirs to the Irish tradition of great, unsettling satire” in the mould of Flann O’Brien.

Blind Boy Boat Club said that the O’Brien comparison was a welcome one.

“He galloped for miles on a tiny horse, fair play to him, he has our respect,” said Blind Boy.

Asked about the idea behind the duo’s most recent single, Dad’s Best Friend, which has won praise from Russell Brand and Graham Linehan, the Bandit said: “We wanted to make a documentary about our dad’s best friend as a birthday present. So we left a camera in his car for a year and that video was the result.

“We like to see it as an uplifting ode to a man living his life to the fullest and sticking two fingers up to the middle aged spread.”

Blind Boy added that the ‘Bandits expect to be involved in some capacity in Limerick City of Culture this year.

“It’s the least they could do in fairness, after all we got the ghost of St Munchin to lift his curse for the year,” he explained.

The kings of satire, social commentary and versatile hip-hop music will also play in Shakespeare’s Globe theatre after finishing the Soho Theatre run.

The Rubberbandits will perform two gigs at the famous London theatre on March 30 and 31, a sign of their ever increasing popularity in the UK.

The duo performed a 30-date run at the Edinburgh Fringe Festival last year after also previously selling out a run of gigs that Time Out magazine billed “the most popular comedy show in London”.

The Globe booking was labelled “a huge step in their career internationally” by a spokesperson, with the duo sharing a management roster with Graham Norton and Michael Fassbender.

The ‘Bandits have said they are “honoured” to be asked to perform in the theatre, located on London’s Southwark, just yards from the original theatre where Shakespeare’s work was performed.

“We’re both really honoured. I remember back in school that he made a play called The Merchant of Ennis and we love Ennis. We go there for carvery lunches every fortnight,” said Blind Boy.

Asked about performing lengthy stints in both London and Edinburgh, the plastic bag wearing rapper said: “It is great craic, the Tans are pure sound because they become overwhelmed with ancestral guilt whenever they meet an Irish person.”

“Primarily they enjoy our sex appeal. At the end of the day we’re like a pickled version of Boyzone. Except we take our tops off and wear shorts all the time. We smoke loads of fags too, and women love that,” he added, tongue firmly stuck in plastic bag covered cheek.