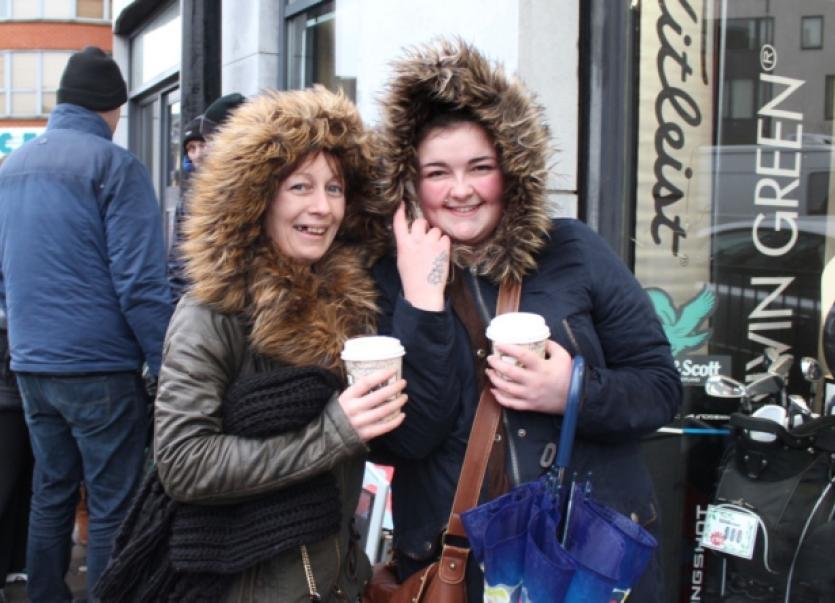 FANS are again braving desperate weather conditions this week in the hope of securing a ticket to see Garth Brooks.

FANS are again braving desperate weather conditions this week in the hope of securing a ticket to see Garth Brooks.

More than 50 hardcore fans are currently lining Old Windmill Road – around the corner from Ticketmaster outlet Gleesons Sports Scene – as of this Wednesday evening, most of whom failed to secure a ticket at the first time of asking.

The Oklahoma superstar took to the airwaves to assure his fans in Limerick they would get “special attention” when an incredible fourth gig goes on sale this Thursday morning.

That assurance was not enough for die-hard fans Stacey Hanlon, Kilteragh, and pal Kerry McCarthy, Rathbane, who were at the head of the queue this Wednesday.

“We queued last week and didn’t get tickets – we were very disappointed,” said Stacey.

Brooks moved this week to assure disgrunted fans who were left in a low place and empty handed as three ‘comeback special’ concerts in the GAA HQ sold out in 90 minutes, that he would “look after them”.

Some fans queued for days to purchase tickets, only to be devastated when the 240,000 tickets sold out.

Just 43 of an estimated 200-plus people that queued in Arctic conditions secured tickets, with Gardai subsequently called as fans voiced their disquiet outside the Ticketmaster outlet.

Speaking to Limerick’s Live 95FM this Monday morning, Brooks said: “We are going to make sure that Limerick, of all the places on this next on sale, gets all the special attention and we will make sure that everyone on the ground there that wants tickets, gets them.

“Ticketmaster has assured us that they are going to send a couple of representatives down there to make sure the system goes smoothly and (concert promoter) Peter Aiken has given me his personal promise that Limerick will be taken care of and shown favouritism for what they went through,” said the country singer.

“It is our intention to make sure that Limerick is the child this time of all of them, that gets the special attention, sweet, sweet people and I just want everyone to be happy there,” he added.

Shop owner Steve Gleeson said: “We have been assured by Ticketmaster that everything will run smoothly on the day.”

An engineer is expected to be present to ensure that fans are facilitated.

“We will placing a special focus on our ticket outlet in Limerick,” said Keith English, managing director of Ticketmaster in Ireland.

“We will have an engineer present in Limerick to ensure the smooth running of the system. We will also increase our level of security at the outlet.”

However, the store noted that they have been selling concert tickets without incident for six months, and are confident that their system is in proper working order.

Mr Gleeson said in the aftermath of the incident last week that he had “sympathy” for fans, some of whom voiced their displeasure at being left empty handed.

The demand for tickets for the concerts – to run from July 25-28 – is unparalleled, with Brooks becoming the first artist to play four successive gigs in Croke Park.