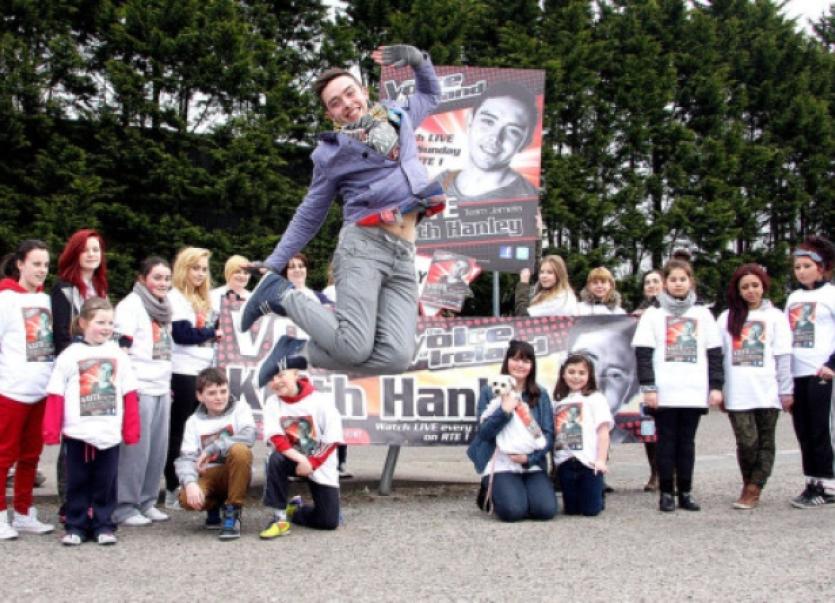 HE counts Tina Turner as his all-time favourite performer and for Charleville’s Keith Hanley is was a case of being “simply the best” on Sunday night when he scored the highest marks recorded on RTE’s The Voice of Ireland.

HE counts Tina Turner as his all-time favourite performer and for Charleville’s Keith Hanley is was a case of being “simply the best” on Sunday night when he scored the highest marks recorded on RTE’s The Voice of Ireland.

The 19-year-old - who is the grandson of the late Cathaoirleach of Limerick County Council, John Gallahue – wowed with his energetic performance of Madcon’s Beggin’.

The hard-hitting, straight-talking judging panel who are often divided in their opinions were unanimous in their praise for Keith – with rocker Bressie and R&B singer Jamelia each awarding him the first 10/10 of the series.

“I was just over the moon. I couldn’t get over it. Last week they were pushing to give an eight, never mind a nine and a 10,” said Keith this week.

“I know it’s an added pressure now to try and reach that standard every time I am on that stage but I feel it’s going to give me more of a push and drive to constantly do the best I can”.

According to Keith’s mum, Alice, her only son has always dreamed of musical stardom.

“He was always mad for the stage and was always hoping that someone would see him and pluck him out of the crowd,” she explained.

The mother-of-two was determined however, that her boy would have a good head on his shoulders and she advised him to get an education before he made any big decisions.

“I was always saying ‘No you have to keep your feet on the ground and get a job and have a backup,” she explained.

Alice, her daughter Eileen, 23, who is a hairdresser in Melo Yelo on Shannon Street in Limerick, and a strong band of supporters have been travelling to Dublin since September in support of Keith. Sadly, Keith’s father Martin passed away in 2005.

Last week, the talented teen who is known for his trademark dungarees with one strap left hanging, had an enthusiastic group of 115 supporters in Dublin’s Helix to support him during his live performance.

While Alice admits her stomach “is in knots” every time he performs, Keith meanwhile is “cool out”.

His comfort in front of the cameras, in particular, has been singled out and with a superstar such as Tina Turner as his idol, it’s clear to see where Keith gets his on-stage inspiration from. “It’s just her performance element – that’s what I strive for,” Keith explained. His favourite artists, he said, would be Beyonce, James Brown and Stevie Wonder.

A former student of the CBS in Charleville, Keith is studying early childhood care with special needs at Mallow College of Further Education. “In transition year he did a week’s work experience in St Joseph’s Foundation and he loved it. He is dyslexic and he felt he wouldn’t get the points to go to the bigger colleges so he researched and found out that the course was available in Mallow,” Alice explained.

According to Keith’s uncle, Dan Gallahue, the buzz in Ballylanders as a result of Keith’s success has been unbelievable. Sunday evening, Gallahue’s Bar in the village was “packed to capacity” ahead of the live show.

“The atmosphere was supposed to have been absolutely electric,” said Dan who travelled to the Helix to support his nephew.

Keith’s late grandfather, John Gallahue of Ballylanders, would, no doubt, be extremely proud of his grandson’s success. “Indeed he would,” Keith smiled. “My uncle was just saying that if he was alive he would be tracing back all the generations – down to Adam and Eve, to find where I got the genes.”

Limerick is also represented on The Voice by Dooradoyle’s Aoife McLoughlin, and Tammy Browne who is originally from Kildare but has been living in Limerick for a number of years.