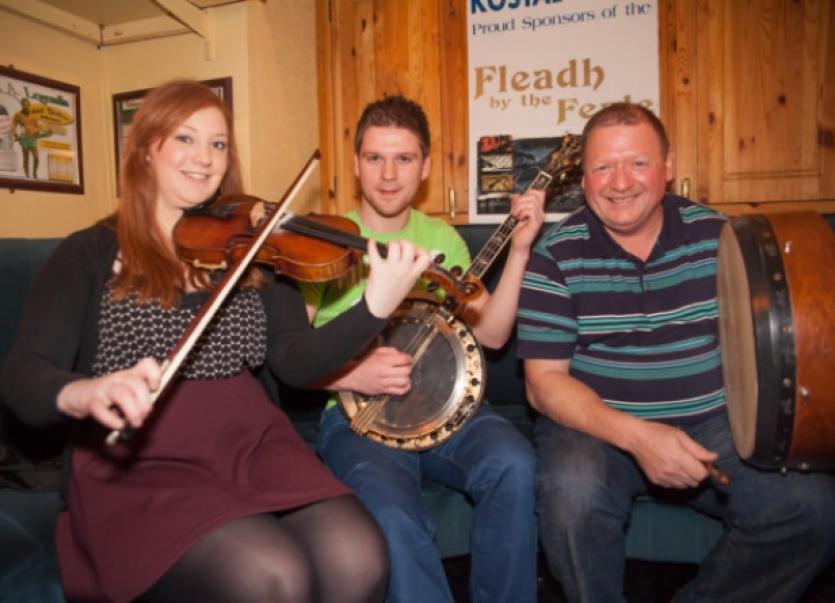 A giant fireworks display will celebrate this year’s 20th anniversary of Fleadh by the Feale and will bring the curtain down on the packed four-day programme which takes place over the May Bank Holiday weekend in Abbeyfeale.

A giant fireworks display will celebrate this year’s 20th anniversary of Fleadh by the Feale and will bring the curtain down on the packed four-day programme which takes place over the May Bank Holiday weekend in Abbeyfeale.

“We had fireworks for our 10th anniversary in 2004 and we will have them again this year,” Pat Quill, chairman of the organising committee said this week when they officially launched the fleadh programme.

Most of those on the current committee were on the original committee of 1994, and indeed, had also done duty on organising County Fleadhs for two years before that.

The coming into being of a May bank holiday copperfastened their decision to keep going and start Fleadh by the Feale, secretary Maureen Murphy explained.

A grá for music plus a warm welcome have been the successful ingredients for the Fleadh’s two decades of success but the detailed organisation which ensures everything runs smoothly has also played its part.

Fleadh by the Feale has also endeavoured to offer something for all ages; from the gig-rig in the Square, to the storytelling; from the master classes to the busking; from the céilí to the art competition.

It also manages to balance the old faithfuls with the excitement of the new. This year, for example, the All-Ireland bone-playing championship will take place yet again, a unique event which almost single-handedly has kept the art alive. But a new trad group Moxie will also get their chance to shine when they take to the gig-rig on Saturday evening as part of the free, on-street entertainment.

This year’s celebrity concert will feature Sharon Shannon and her band on the Sunday night and tickets are selling well for the event.

They have been overwhelmed by the response to this year’s 20th anniversary poster competition which has been running in the five local national schools. The entries are currently being judged and lll the entries go on display in Abbeyfeale library on Thursday, May 1.

The Fleadh also provides a very welcome economic boost to the town. “Anything that is organised and that brings in extra revenue has to be welcome,” Ms Murphy said. “Everybody gains a little bit. It keeps people at home that weekend who might otherwise go away and it brings people back who are living away.”

The full programme is available from this week or go to www.fleadhbythefeale.com.