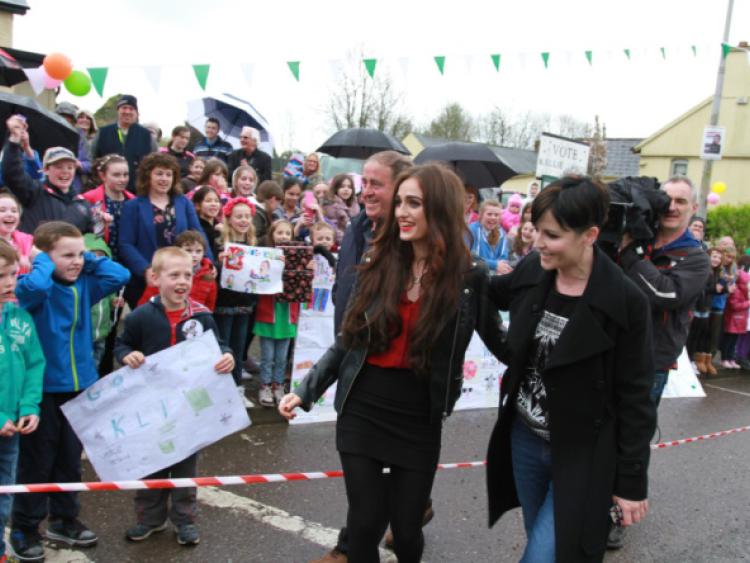 OVER 400 people lined the streets of Kilbehenny this week to show their support for local girl Kellie Lewis and her mentor, fellow Limerick woman Dolores O’Riordan, who are hoping to take The Voice of Ireland crown this Sunday night.

OVER 400 people lined the streets of Kilbehenny this week to show their support for local girl Kellie Lewis and her mentor, fellow Limerick woman Dolores O’Riordan, who are hoping to take The Voice of Ireland crown this Sunday night.

Kellie, 21, is one of four finalists battling it out for the top spot in the hugely popular talent contest.

Kellie will be performing three songs in tomorrow’s final.

The support from her local community in Kilbehenny, she said, has been “overwhelming”

“Dolores and I got out of the van on Tuesday in Kilbehenny and there was about 400 or 500 people gathered outside the community centre. It was amazing,” said the singer.

“Dolores was so happy that there was so many kids there. They made us little cards.”

The visit was recorded by RTÉ and will form part of a package which will be aired on Sunday night’s show, coverage of which begins on RTÉ One at 6.30pm.

Kellie was thrilled to have been able to bring Dolores, her childhood idol, home to her family’s dairy farm in Knocknascrow, high up on Galtymore, where she met her parents Mary and William and was introduced to some of the animals on the farm.

“She had never held a baby lamb before so she was loving it,” Kellie smiled.

“We were chilling out. She loves my mam and dad and she knew exactly what to get them – a bottle of whiskey and a box of chocolates.”

The bubbly brunette said she would love to win out the competition for both herself and Dolores “two proud Limerick women”.

“Dolores is always telling me stories about how hard it was growing up and trying to break the mould as a girl in Ireland. She knows that it can be a lot harder for girls in Ireland, which is very true. It is a lot harder for a girl to make it in the music industry. Girls have to be twice as good as guys to make it - that’s a fact. Dolores and I have talked for hours about this. We want this, we really do. It’s two girls from Limerick. We really want it as a team.”

Kellie will perform three songs as part of the final.

There is one group performance with the four finalists. Kellie will also perform with an Irish celebrity who she can’t reveal the identity of and she will also sing her favourite song of the series.

She was delighted with last Sunday night’s performance which saw her score the second best result on the night, 24 points.

“I had a really tough week the week before so I was just thinking to myself, go hard or go home. I knew I had to give it my all. My muscles were absolutely clinched on the last note. It was really, really exhilarating. I wanted to show people I am here for a reason.”