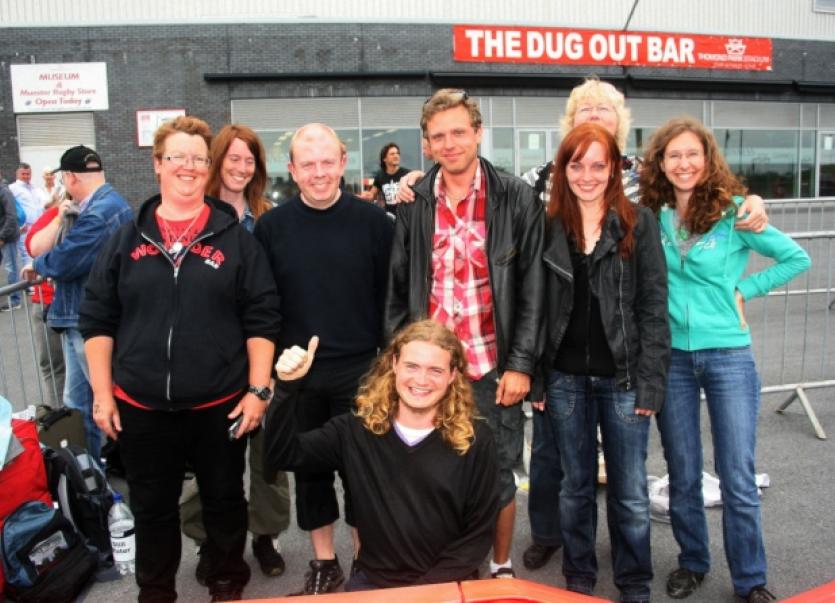 A specially constructed compound housing a landscaped garden and yoga centre has been built for Bruce Springsteen on the training pitch in Thomond Park.

A specially constructed compound housing a landscaped garden and yoga centre has been built for Bruce Springsteen on the training pitch in Thomond Park.

The legendary rocker requested that a compound of tented marquees and portable cabins be built ahead of the gig this Tuesday, taking up half of the back pitch in the shadow of the stadium.

Springsteen, expected to fly into Shannon before lunchtime today, while his E-Street band arrived into Shannon last night, will relax ahead of the gig in the compound, which has a hospitality area for the long list of VIPs that are to attend the show, the first in a series of sell-out Irish gigs for the American icon.

However, the compound is the only one being constructed in Ireland for Springsteen’s shows, and stadium boss John Cantwell said the 63-year-old would be going “all-out” for the Limerick show.

“We have a compound built on the back pitch for him; for his concerts in Ireland, this is the one where he is going all-out in terms of his presence on site,” explained Mr Cantwell.

“The guys arrived here on July 8 and built the compound for Bruce, which has a yoga centre and a landscaped garden and everything prepared - he will spend hours there, he has his own hospitality area, a marquee tent.

“That is all purpose-made and it is the only venue where he is doing this which is pretty cool and we will have himself and the band on-site for most of the day tomorrow,” he added.

Over 30,000 fans will crowd into Thomond Park for the gig, making it the biggest ever to take place in the city.

The legendary performer is expected to stay in the area, but hoteliers and concert officials are remaining tight-lipped as to a location.

John Cantwell said that promoters Aiken had told him that Springsteen has “done his research” on the stadium.

“We have heard back from the promoter that he is really looking forward to coming to Limerick, he has done a bit of research, he has found out how sporting mad the place is, he has looked at a bit about Thomond Park and Munster Rugby. He has never played here before so this is something he likes to do, in terms of saying ‘this is going to be a knockout gig’,” he said.

Peter Aiken has likened the gig to “more an event than a concert”.

“There is a serious atmosphere around the place at present. Bruce and the hurling is all anybody is talking about,” he said.

Fans started queuing for tickets as early as last Thursday, with several hundred in line by this Monday evening.

Gates open at 5pm and there will be two pits in front of the massive stage, which is the width of the pitch, each holding 1,000 people, with up to 15,000 people on the pitch.

Every hotel in the city is booked up, while estimates suggest the concert will be worth millions to the economy.

Meanwhile, fans have been queueing outside the stadium since last Thursday night, with Birmingham’s Jamie Tongue first in line for a pit ticket at Thomond Park.

The student said he had seen Springsteen more than 30 times in the last 12 months, and was attending all of the Irish gigs on the tour. Asked what it was about the Boss’ music that inspired such devotion, he said: “The music and the shows are so spontaneous and energetic - he is still the best”.